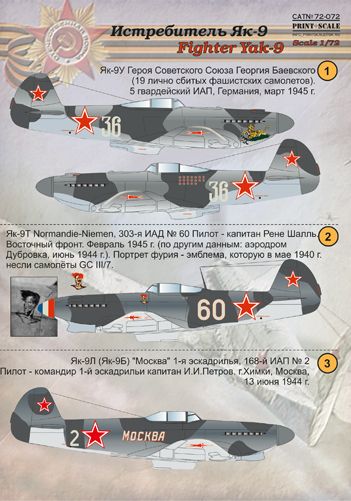 Yakovlev Yak9 (Print Scale PRS72-072)
€ 8.22
EU: incl. tax € 9.95
Reduced shipping charge may be applicable depending on country of destination and contents of shopping cart. Will be shown before checkout.Add to cart

This product was added to our database on Saturday 15 March 2014.

2. Yak-9T - flown by Capitan Rene Challe. Normandie-Niemen Regiment of the 303rd Fighter Division (IAD). Eastern Front, February 1945 (according some sources this a/c was also spotted at Dubrovka airfield in June 1944). The portrait of Fury was mark of G C I II/7 aircraft since 1940. .

4. Yak-9M - flown by soviet ace pilot G.L. Nakaznyuk. (5 personal and 5 group victories. Participated in 60 aerial combat in 78 sorties). This a/c was flown Nakaznyuk from August 1944 and shot down a Fw-190. The aircraft was gray on all surfaces. The emblem of the Orden of the Battle Red Banner was only on the port side.

23. Yak-9P of North Korean Air Force. This a/c was captured by the US troops at "Kimp-Ho" airfield