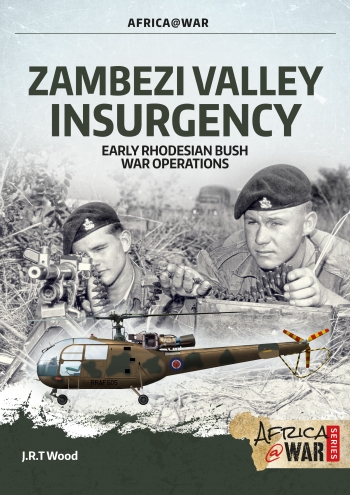 Share this product
Also in this series:
9781912866854Helion & CompanyBooks on aviation / War in Africa
Product description

Across Africa in the post-1956 era, the aspirations of African nationalists to secure power were boosted and quickly realized by the British, French and Belgian hasty retreat from empire. The Portuguese, Southern Rhodesian and South African governments, however, stood firm and would be challenged by their African nationalists. Influenced by the Communist bloc, these nationalists adopted the 'Armed Struggle'. In the case of Rhodesia, the Zimbabwe African People's Union (ZAPU), led by Joshua Nkomo, took this step in 1962 after their effort to foment rebellion in Rhodesia's urban areas in 1961-62 had been frustrated by police action and stiffened security legislation. Rhodesia's small, undermanned security forces, however, remained wary as Zambia and Tanganyika had given sanctuary to communist- supplied ZAPU and Zimbabwe African National Union (ZANU) guerrillas. The Rhodesians had foreseen that the northeastern frontier with Mozambique would be the most vulnerable to incursions because the African population living along it offered an immediate target for succour and subversion. The Portuguese were not seen as a bulwark as they were clearly making little progress in their counter-insurgency effort against their FRELIMO nationalist opponents. The Rhodesians were fortunate, however, that ZAPU and ZANU chose to probe across the Zambezi River from Zambia into the harsh, sparsely populated bush of the Zambezi Valley. The consequence was that the Rhodesian security forces conducted a number of successful operations in the period 1966-1972 which dented insurgent ambitions. This book describes and examines the first phase of the 'bush war' during which the Rhodesian forces honed their individual and joint skills, emerging as a formidable albeit lean fighting force.