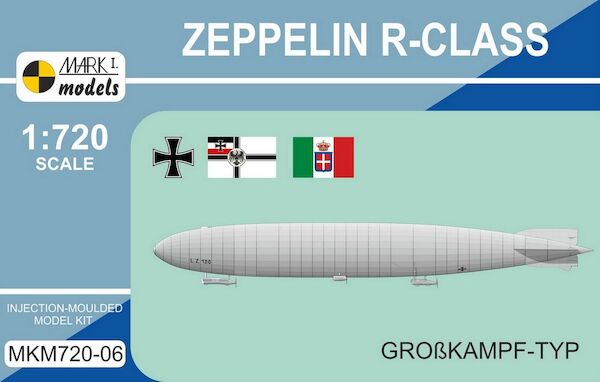 This product was added to our database on Wednesday 23 May 2018.

Rigid airships (or dirigibles) were produced and relatively successfully employed in the period from the early 1900s to the end of the 1930s. During WWI the Zeppelin company, of Imperial Germany, built nearly one hundred military airships both for their army and naval corps. The airship type and construction was characterised by particular class (A to X). During The Great War they were used as a new type of attack weapon for bombing and also for reconnaissance and naval patrol work. The Zeppelin R-class airship was developed in 1915-16 and consisted of structural metal framework covered in doped fabric containing cells filled with a hydrogen lifting gas. They were fitted with vertical tailfins and horizontal tailplanes with control surfaces. The crew members were carried in two suspended gondolas (cars) mounting Maybach engines and pusher propellers, while bombs were contained in internal bomb bays. Defensive gunners were stationed in the front upper part of the airship's body, in an aft gun position behind the rudders, two in gondolas and in each of the cars either side of the hull. In total, 17 R-class airships were built.

This injection-moulded kit contains 49 parts, including a useful model stand. A comprehensive instruction leaflet and a decal sheet are included.