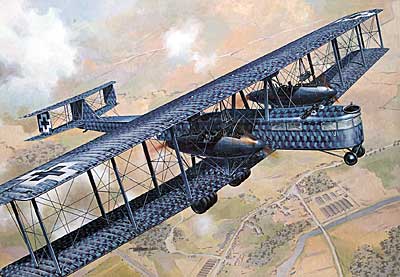 This product was added to our database on Friday 11 September 2009.

Rodens biggest.
The Zeppelin Staaken R.VI was the world's first series produced strategic bomber, created in 1916 by a group of designers and engineers under the direction of Ferdinand Graf von Zeppelin. It was an extraordinary airplane for that period of time in every respect. There was no precedent for designing such machines and that is why so many decisions had to be taken and modifications made during the process of construction. However, as well as the structural and technical problems which designers of these winged giants had to contend with, there was an overriding manufacturing problem the challenge of meeting an order for series production and not just for a single construction. The Zeppelin concern did not have the capacity to produce it; the initial order for the bomber was for 15. The only way to overcome this obstacle was to subcontract other firms to take part in production. In December of 1916 the German Military Air Command (Idflieg) divided an order as follows: Zeppelin was to produce three machines, Albatros OAW three also; Aviatik was to produce another three aircraft and six airplanes were requested from Sch³tte-Lanz. During production it became clear that Sch³tte-Lanz was unable to cope with the task, which is why the order was reduced from 6 to 3 units, and the Zeppelin factories took back the order for the other three machines.
At the end of 1917 when it became possible to test the new powerful Basse & Selve BuS.IVa 300 hp engines, Aviatik received a further order for an extra three machines, because the earlier machines were already on the final stages of construction. These three additional machines received the serial numbers R.52/17, R.53/17, and R.54/17, and featured several differences in comparison with their predecessors. First of all, the most visible difference was in the new shape of the fuselage nose - the distinctive 'balcony' was lost, from which the navigator conducted the field of fire in the front hemisphere, and the position was raised up along with the pilot's cockpit. The pilots were no longer inside the fuselage, but sat looking out over the top of the fuselage, into which a special cockpit section was cut. There was no improvement in the management of the aircraft, in fact it complicated the process of landing to some extent. Also, the aircraft had a central tailfin, strengthening the construction of the empennage, and balanced ailerons were fitted. In May 1918 the first tests of the R.52/17 took place with the new Basse & Selve BuS.IVa engines. Theseengines proved to be very disappointing and they were not of the necessary reliability for operational use by these aircraft, and that is why they were soon replaced by the Maybach Mb.IVa, which had been fitted to some of the earlier Zeppelin Staaken R.VI's.
The war career of the R.52/17 was all too short. This machine was sent to the Front and into the inventory of Rfa 500 at the end of June 1918. Only a month later, on the night of 11th-12th August 1918, during a raid over France, this aircraft caught fire in the air and fell down near Villers la Tour, burying in its wreckage Hptm. Erich Schilling and his entire crew. The next machine, R.53/17, was delivered to Rfa 500 soon afterwards that August, but it suffered aseries of technical problems and could not be accepted for operational use. This aircraft was passed on to the strategic bombing training unit in Cologne, where it met the Armistice. In compliance with the Articles of the Versailles agreement it was destroyed in 1919. The last of the R.VI's, R.54/17, had not even reached a finished state when the Armistice agreement was signed. This machine was also broken up in 1919.