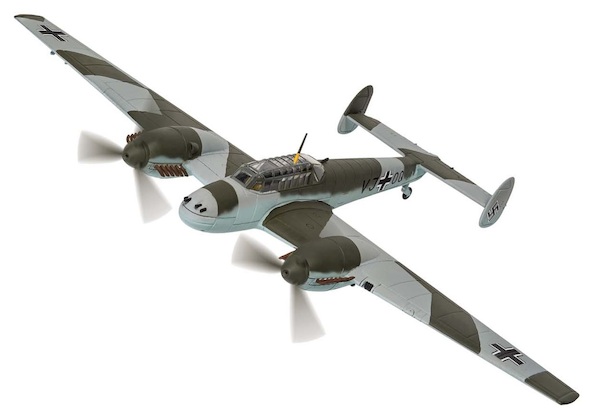 One of the most mysterious episodes of the Second World War occurred over Northern Britain on the night of Saturday 10th May 1941, as the Chain Home radar network picked up an unidentified raid approaching the coast of Northumberland. Crossing the coast near Alnwick, the Royal Observer Corps identified the raid as a single Messerschmitt Me110 fighter which continued flying inland in the direction of Glasgow and was tracked until it hit the west coast of Scotland. With a Defiant nightfighter now on its tail and with fuel reserves running low, the intruder was seen to turn back inland, before crashing at Bonnyton Moor, Eaglesham, near Glasgow at 23.09pm. The lone pilot was observed parachuting to earth and was promptly detained by a pitchfork toting farmer, who when inquiring if the airman was German, was surprised by the excellent English of his prisoner, who went on to give his name as Hauptmann Albert Horn. Collected by the Home Guard, the prisoner was later interviewed by an Observer Corps Major, who almost immediately recognised the airman as none other than Rudolf Hess, senior Nazi Party official and Deputy Fuhrer of Germany. Why had such an important political figure made such a hazardous, one-way flight and what were his intentions? Taking off from the Messerschmitt factory airfield at Augsburg-Haunstetten in Bavaria at 17.45 UK time on 10th May 1941, Nazi Party official Rudolf Hess had a long and dangerous flight ahead of him. Even though his unarmed Me110 fighter was carrying additional fuel, this was always going to be a one-way flight and it is unclear what his intentions were – surely, capture by the British would be the best possible outcome. During later interrogation, it is reported that Hess planned to land by parachute on the estate of Scottish nobleman, the Duke of Hamilton, a man he had previously met at the 1936 Olympic Games in Berlin and someone thought to be politically influential in trying to muster support for a negotiated peace with Germany. A fascinating incident which has been the subject of a great many conspiracy theories over the years, Hess's true intentions have never been definitively ascertained, however, the flight did coincide with Germany's decision to launch a massive offensive against the Soviet Union, in addition to Hess being somewhat side-lined in the Nazi Party hierarchy. Hitler was reported to have been enraged on hearing about the actions of his trusted deputy and described him as having lost his mind. This incident did highlight the invaluable contribution of the Royal Observer Corps during WWII, as once a hostile aircraft had reached the British mainland, radar was of no use and tracking information was provided by this impressive network of vigilant volunteers.