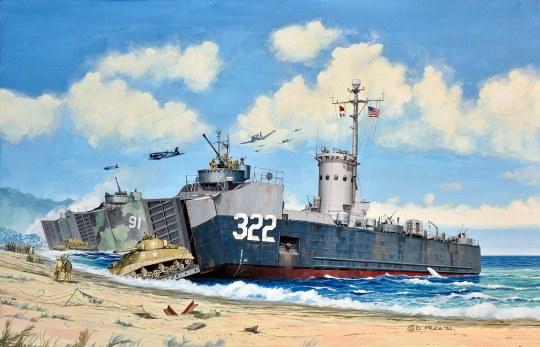 This product was added to our database on Monday 21 September 2020.

Landing Ships of the LSM-Class (Landing Ship Medium) were used from the middle of 1944 by the U.S. Navy in the fight against Japan in the Pacific. Totalling more than 550 ships they were the main component of the amphibious forces for landing troops and vehicles on enemy beaches. The loading capacity of a LSM roughly corresponded to a mechanized platoon. The steel hull had nine watertight bulkheads. With an anchor located at the stern, the ships could withdraw from the beach without assistance. Armour plating protected the superstructures against small arms fire. The early LSM were mostly equipped with six 20-mm Oerlikon guns for self defence. The open-top cargo area encompassed almost the entire length of the ship and was at maximum 7.9 m (26 ft) wide. By the end of the war, nine ships were lost mainly due to kamikaze attacks. After the end of World War 2 some ships went into service with allies armed forces. In 1958 NATO partners Germany received three LSM and two LSM(R).

Authentic representation of the following versions: