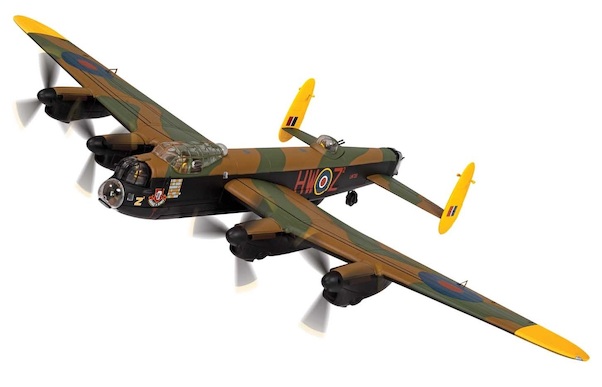 Avro Lancaster B Mk.III LM739/HW-Z(2) 'Grog's the Shot', RAF No.100 Sqn, Elsham Wolds, Berchtesgaden Raid lead aircraft, 25th April 1945 During the closing stages of the war in Europe, the men of Bomber Command were given one final opportunity to strike at the very heart of the hated Nazi regime and potentially bring about an early cessation of hostilities. Mounting a major raid against Hitler's famous Berchtesgaden Alpine retreat would mean a long and dangerous daylight mission for the bomber crews, however, they would be targeting chalets and lodges belonging to the Nazi party elite and at briefing, they were told that intelligence reports suggested the Fuhrer may be seeking refuge there, awaiting the end of the war. In fact, senior Allied planners knew Hitler was in Berlin, but did not want Berchtesgaden to become a Nazi shrine, or a rallying point for continued resistance.

At the head of the raid, the experienced crew of Avro Lancaster LM739 'Grog's the Shot' would be leading a joint force of more than 300 Lancasters, 16 Mosquitos and 270 USAAF Liberators, with the formation covered by 90 Mustang fighters. As well as firing Verey flares during the mission and trailing yellow pyrotechnic stars from the rear turret to assist with formation and navigation, the aircraft was also distinctively painted with yellow wing tips and rudder/vertical stabilisers, signifying its position.