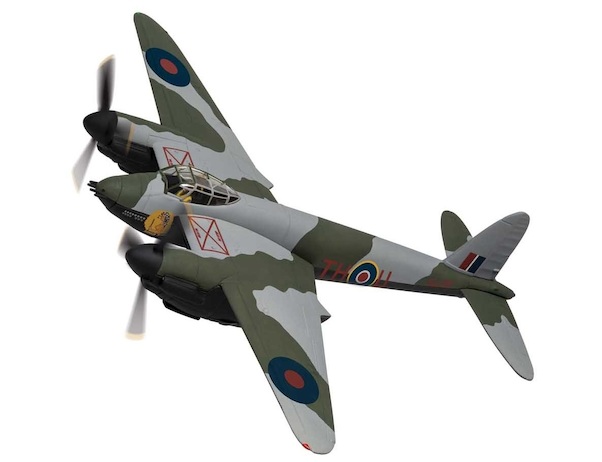 Encouraged to join the Royal Canadian Air Force following a chance meeting with a serving RCAF pilot, American James Forrest 'Lou' Luma successfully negotiated his pilot training and was posted to fly the de Havilland Mosquito in England, even though he didn't even know what one looked like at that point. Arriving in England in the summer of 1943, he was assigned to No.418 squadron to fly night intruder missions and was given the luxury of just a single flight
observing a flight instructor (from the navigator's seat), before making his first Mosquito solo. Re-assigned to the USAAF in July 1943, Luma was allowed to remain flying with the RCAF as they didn't want to break up his successful partnership with friend and navigator since training, Colin Finlayson, a man with whom he would go on to fly thirty operational missions. The Mosquito fighter the pair normally flew was quite unusual in that it sported nose artwork, something which was the exception rather than the norm on Royal Air Force fighters.

Known as 'Moonbeam McSwine', the nose art featured a pipe smoking, gun toting Hillbilly girl of the same name, a character from the 'Li'l Abner' comic strip which was popular at the time. The pair scored their first victory when shooting down a Messerschmitt Me 410 nightfighter near Wunstorf on the night of 21st/22nd January 1944, an aircraft which had shot down a British bomber earlier that same night and had returned to base to re-fuel and re-arm. On taking off for this second sortie, the Luftwaffe pilot forgot to turn off his lights,
making the German fighter relatively easy prey for Luma in his prowling Mosquito intruder.