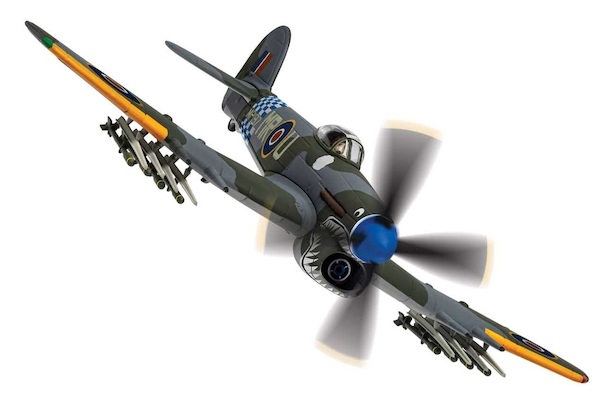 Despite the fact that the deep chin radiator of the Hawker Typhoon fighter was particularly suited to the application of some aggressive looking nose artwork, most RAF aircraft, particularly Hawker Typhoons, rarely featured anything more than their standard squadron colours during WWII. One high profile exception to this rule was Typhoon IB MP147, an aircraft which featured a fearsome array of teeth behind its bright blue spinner, making it one of the most distinctive RAF aircraft in the European Theatre. Thought to be the only Typhoon to feature a representation of sharks teeth on its radiator, MP417 'Sharky' was issued to RAF No.245 Squadron in August 1944, whilst Allied units were engaged in the savage fighting around the Falaise Pocket and remained with the squadron until it disbanded on 15th August the following year.

Logbook entries show that Sharky was flown by successful Canadian pilot Flt. Lt. Harrison Taylor 'Moose' Mossip, who had been awarded the Distinguished Flying Cross for his previous successes operating the Typhoon with RAF No.1 Squadron. Known to possess a particularly aggressive flying style, Mossip was one of the pilots who helped to establish the reputation of the Typhoon in the ground attack role and it is thought that these sharkmouth markings were applied to this aircraft in recognition of this tenacious flying style. Significantly, this aircraft flew operationally during WWII whilst wearing these markings.