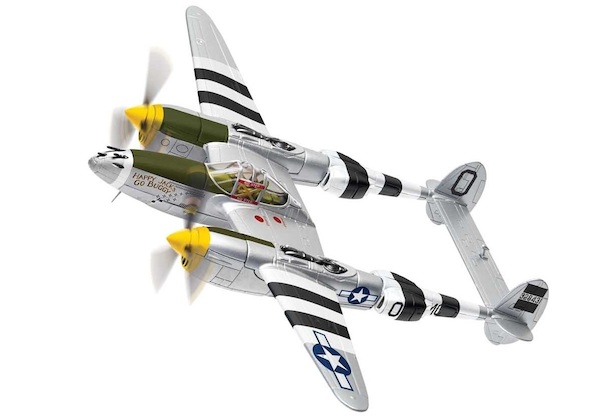 Lockheed P38J Lightning 43-28431 / MC-O, 'Happy Jack's Go Buggy', Capt. Jack M Ilfrey, 79th Fighter Squadron, 20th Fighter Group, US Eighth Air Force, Kings Cliffe USAAF Station 367, 12th June 1944 When learning about the exploits of pilots who served during the Second World War, some seem to be so incredible that they appear to have come straight from the pages of a Boy's Own magazine. One such airman was American Jack M. Ilfrey, a man who was already a P-38 Lightning 'ace' when he joined the 79th Fighter Squadron of the 20th Fighter Group at Kings Cliffe in April 1944. At that time, missions were heading deep into Germany and although the Luftwaffe could be elusive, when they did show up, they came in numbers and were extremely aggressive. On his third mission with the 79th, Ilfrey's Lightning was involved in a mid-air collision with a Messerschmitt Bf 109, ripping almost four feet of his starboard wing off - he made it back to base, but only just.

His Lightning carried the name 'Happy Jack's Go Buggy' on its nose, reputedly applied by his crew chief as a joke, because everyone thought Ilfrey always looked a bit miserable. By the 12th June, the Lightnings of the 20th FG had been assigned dive bombing and strafing missions behind enemy lines and the mission that day was to destroy a vital railway bridge near the French village of La Possonniere
on the banks of the river Loire. The Lightnings executed their mission with ruthless effectiveness, however, the minutes which would prove particularly memorable for Jack Ilfrey.