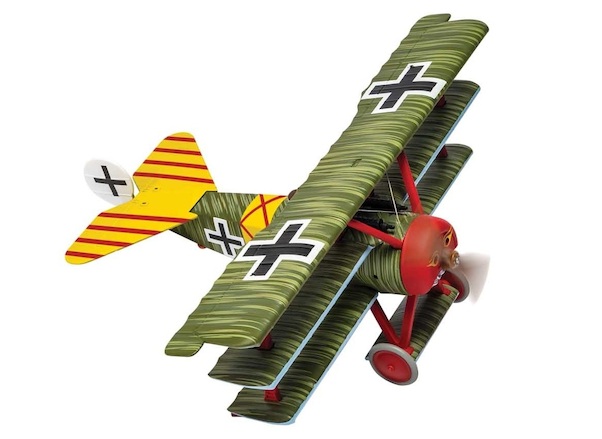 Steinhauser, Jasta 11, Jagdgeschwader 1, Cappy Aerodrome, France, 21st April 1918 - Last combat sortie of the Red Baron Flying one of the six Jasta 11 Fokker Dr.1 fighters which climbed away from Cappy Aerodrome in the mid-morning of Sunday 21st April 1918, Werner Steinhauser was beginning to develop into an extremely gifted aviator under the guidance of his inspirational Commanding Officer, Manfred von Richthofen. When he initially joineÝthe unit in early 1918, he only hadÝa solitary observation balloon victoryÝto his name, but now that he foundÝhimself in the company of some ofÝthe Luftstreitkr‰fte's most gifted fighterÝpilots, he began to show real skill andÝpoise during combat situations andÝas a consequence, his victory tallyÝwas increasing.

Flying alongsideÝvon Richthofen in his ownÝdistinctively marked personalÝFokker Dr.1 fighter on the morning of the 21st April,ÝSteinhauser would be involved in the intense fightingÝwith the Sopwith Camels of RAF No.209 Squadron whichÝultimately resulted in the death of his mentor. The famedÝ'Flying Circus' never really recovered from the loss of vonÝRichthofen and from this date, an ever increasing numberÝof Allied fighters in the air at any one time would resultÝin the loss of the majority of their most successful pilots.ÝGoing on to score a further six aerial victories after thisÝfateful day, Werner Steinhauser would himself be shotÝdown and killed near Neuilly on the 26th June, just threeÝdays before he would have celebrated his 22nd birthday.