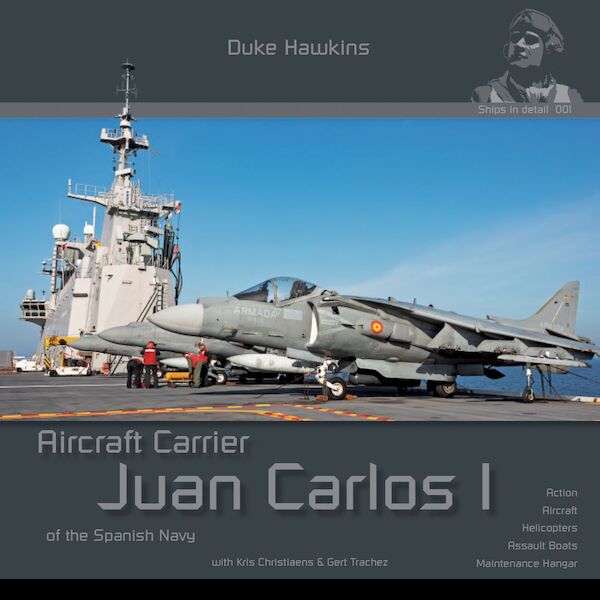 Aircraft Carrier Juan Carlos I of the Spanish Navy

This product was added to our database on Sunday 19 july 2020.

We are proud to announce the first book in a new series by HMH Publications. This new series brings extensive photographical portraits of Aircraft Carriers, with the first one being the Spanish Juan Carlos I. In this first book in the series, HMH offers you a close-up at the operations of the Spanish Navy's flagship, with Harrier IIs and helicopters landing and taking off from the flight deck, a closer look at the ship itself, including the 4 main decks: the lower deck with the floodable area in the aft, the Hability deck, the Hangar deck and garage and finally the flight deck, with the ski-jump ramp.

You are taken on a tour around the ship, introducing the crew, equipment and of course the jets and helicopters The Harrier jump jet is prominent in this first book on aircraft carriers. The jet is shown in every detail, from every angle. Some spectacular air to air photos are included! Many helicopters operate from the Juan Carlos I. HMH's lead photographers Kris Christiaens and Gert Trachez had the opportunity to photograph many helicopters in action; AB-212, Sea Kings, Cougars, ... The Juan Carlos I is capable of operating 4 LCM1E landing crafts. HMH let you to take a closer look at the amphibous operations of the ship and even bring a visit to the home base at Rota!

During our stay on board of the Juan Carlos I, HMH was able to photograph a lot of action! They were on the deck when a flight of EAV-8B Harrier IIs landed on the deck; that was LOUD !! The crew of the ship is as professional as they come; everyone knows exactly what they have to do to keep the operations running smoothly - quite impressive! Of course, the Harriers are the stars on the flight deck. The book shows them being refuelled, prepared for take off, in action and in detail! You are taken to the bridge of the ship and introduced to the captain, shown the quarters and even take a look at the medical facilities on board of the ship!