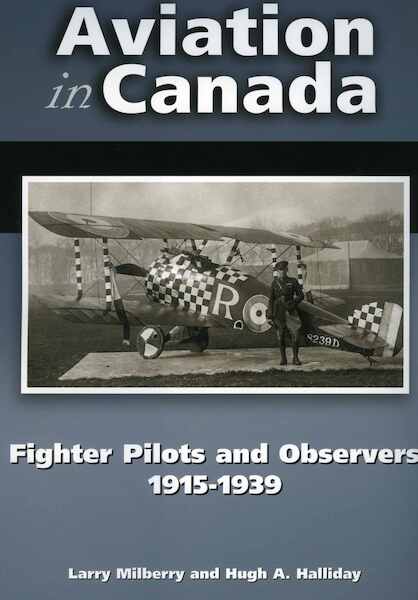 This product was added to our database on Tuesday 11 December 2018.

Welcome to Aviation in Canada: Fighter Pilots and Observers 1915-1939, a beautifully-produced book that continues CANAV's acclaimed "Aviation in Canada" series. Solid Canadian history from start to finish, this authoritative book revives a key theme in Canada's aviation heritage in a landmark year – the 100th Anniversary of the end of the First World War. The First Great Aerial War Fighter Pilots and Observers 1915-1939 is Canada's only major title in print covering the nation's pioneers of aerial combat. It honours the men, the aircraft and the organizations, detailing in a fresh light the incredible story from training in Canada as early as 1914, to the deadly skies over the Western Front, Italy and wherever else the men were needed. Naturally, the best-known Canadian personalities in the air war are here – from Barker and Bishop to Collishaw, Hobbs, McEwen, McLeod, McKeever, etc., but the authors also have striven to feature many lesser-known airmen from all across Canada. In this 100th Anniversary, the book gives these latter fellows some much-deserved (if longdeferred) credit. Beginning in 1915, Canadian airmen took on some of the most perilous duties of the First World War. Their "steeds" included such famous single-seat scouts as the D.H.2, SE.5 and Nieuport; and the Sopwith Pup, Camel and Snipe. Then there were the two-seaters including the B.E.2, Bristol Fighter, F.E.2 and R.E.8. Other men flew large, lumbering Felixstowe flying boats and Handley-Page O-100 bombers doing air-toair combat as necessary, even having specific missions to intercept Germany's
dreaded Zeppelins. Many first-hand accounts of harrowing deeds fill the pages, the details drawn from official combat reports, letters, diaries and newspapers.
The war over on November 11, 1918, what did Canada's (estimated) 20,000 veterans of the air war do? The authors felt that this should be explained, so include some coverage of the civil war in Russia, where several Canadians fought into 1920. That conflict
over, the last of Canada's airmen sailed for home. Fighter Pilots and Observers 1915-1939 goes on to explain how in 1920 some veterans gravitated to the Air Board in Ottawa to establish the regulations for and encourage the growth of civil aviation in peacetime Canada. Others went straight to work as pioneer bush pilots, introducing air transport to such industries as forestry and mining, and connecting remote communities to major centres for the first time. In one case, Victoria Cross heroes, Barker and Bishop, operated passenger services in Toronto and Florida using war surplus flying boats. The Interwar Era The Canadian Air Force was established in 1920. The new service immediately attracted former fighter pilots and observers, then the CAF evolved in 1924 into the Royal Canadian Air Force. Although the RCAF chiefly was busy with nonmilitary affairs, a few senior officers realized that Canada (no matter how peaceful) needed some of the air combat expertise acquired during the war. To ensure this, a handful of Siskin fighters
was acquired in the late 1920s, then a few Atlas multi-role two-seaters. These were not much advanced over the Camel or Bristol Fighter, but kept a small number in the RCAF up to speed with the fundamentals of aerial combat. With a new war looming, Canada finally
ordered a few modern Hurricane fighters, some two-seat Fairey Battles, etc. This brings the book to a natural conclusion in 1939 when, not surprisingly, hundreds of Canada's veteran WWI airmen began enlisting in the RCAF – ready and willing to fight their second air war. Page after page, you will be fascinated by how all this transpired for Canada's fighter pilots and observers through almost 25 years. Besides its substantial text, Fighter Pilots and Observers 1915-1939 is beautifully laid out on spacious 9x12-inch pages, leaving room for a photographic bonanza. The book's 350 photos represent Canada's first combat airmen, their aircraft and the places where they lived and fought. Some photos may be familiar, but never have so many from the eras covered been so beautifully presented in any Canadian book.