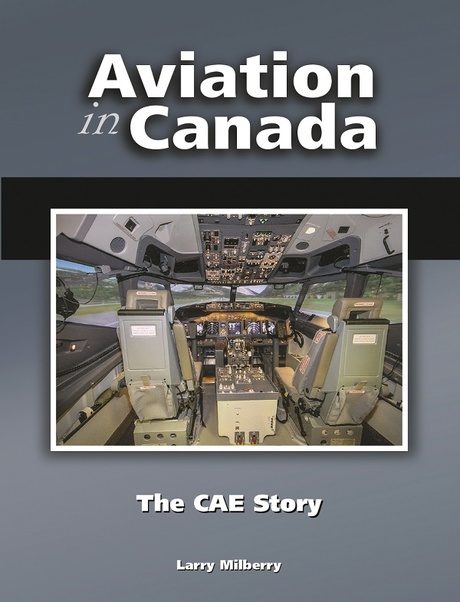 This product was added to our database on Thursday 27 August 2015.

The CAE Story is Volume 7 of our renowned "Aviation in Canada" series begun in 2008. If you have enjoyed such earlier titles as The Pioneer Decades, Evolution of an Air Force or The Noorduyn Norseman, The CAE Story will add to your enjoyment. Following our best-selling histories of de Havilland Canada, Canadair, Pratt & Whitney Canada and Noorduyn, here is the first ever book about this leading Canadian aerospace innovator.

The CAE Story takes you from Day 1 of Ken Patrick's 1947 dream of building a futuristic electronics company, all the way into 2015. Ironically, in 1947 Patrick barely had a clue about flight simulators (other than the Link Trainer). Only by default does CAE get into the business with its CF-100 simulator, but the project nearly sinks CAE. In the nic of time, the company survives, then produces landmark Argus and F-104 simulation training systems. These episodes
are vividly described, along with how CAE transitions to digital computers. Next comes the narrative about CAE's first commercial "sims" (Swissair and KLM
DC-9s). Many amazing anecdotes pop up, including the strange case of JAT paying for its CAE DC-9 simulator with a shipload of canned meat—yes, barter
was do-able in those days.

In the 1950s-70s CAE and its growing list of subsidiaries have USAF electronics repair and overhaul contracts, sell TVs and communications products, operate Mid Canada Line stations, overhaul C-130s, CF-104s, F-84s, T-39s and Viscounts, and manufacture major components for the L-1011, KC-135 and Handley Page Jetstream. CAE acquires a leading forestry equipment company, but fails in the road grader and bushplane businesses. It pumps out auto parts and specialized bronze fittings, overhauls railroad equipment, and designs intricate control and training systems for power stations and such naval fleets as Canada's CPF. In 1988 CAE buys its biggest competitor, Link. The list of activities and accomplishments is incredible. CAE even designs the robotic hand controller
for the Canadarm that's orbiting aboard the ISS as you read this.

The CAE Story brings you to the present when CAE, once on the brink of collapse
due to near-disastrous simulator projects and its entanglement with Link, has 8000
employees, sets the pace in the international flight simulation market, operates global flying schools that help ease today's critical pilot shortage, and is moving boldly into simulation training in medicine.

All the great pioneers of CAE are included in this spectacular book, such kings of
industry as Douglas Reekie, David Race and Byron Cavadias. The great money men and board members, led by Fraser Elliott and Heward Stikeman, also are key to the story. So … The CAE Story is a people, products and processes book, one that you'll be delighted to have in your home library.