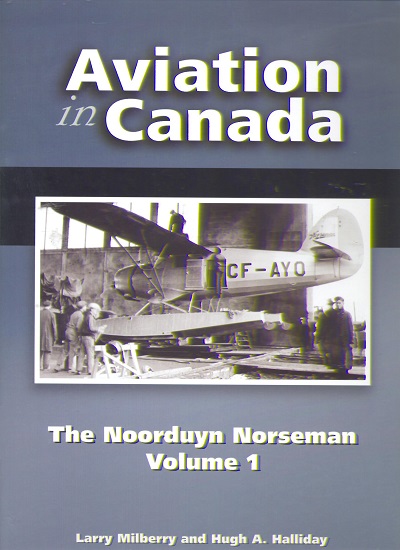 This product was added to our database on Friday 5 july 2013.

This new book -- the first major one ever about the iconic Norseman -- covers its theme in 12 spectacular chapters and includes 400+ photos. It all starts with Bob Noorduyn's idea for a new bushplane, then moves to first flight in 1935, initial production and the Norseman's early years in the bush and Arctic. The wartime era gets Noorduyn over its "near death" trials of 1936-39 – some 800 aircraft roll off the line at Cartierville. The book finishes with the transition to peace. The Norseman V appears, but so do the Husky and Beaver. These chapters also cover the period when hundreds of war-surplus Norsemans flood onto the market, enabling small Canadian bush operators to get a bold new start into the 1950s. Watch for The Noorduyn Norseman, Volume 2 that is to follow soon. It's going to take the story to the present and will be printed in colour throughout with some 500 photos.

The Beginnings: Flown in 1935 and still in service, the legendary made-in-Canada Norseman is one of the world's greatest bushplanes. CANAV is pleased to bring you Vol.1 of this astounding story. Here's a book to delight any fan of Canada's great aviation heritage! Starting with the Norseman as a project in the eye of the great Robert Noorduyn, the early chapters take you from aircraft design, first flight and the early struggles getting sales rolling in the midst of the Great Depression. The pioneer Norseman operators are detailed – Dominion Skyways, Canadian Airways, etc. Next come the war years. Noorduyn's Montreal plant booms as sales to the RCAF and US Army roll in. The photo coverage of all of this is spectacular.

Wartime Norsemans: The authors give the first in-depth coverage of the great work done by the Norseman in the RCAF across Canada, then with the US Army from Alaska to the UK and South Pacific – from search and rescue in Labrador to salvaging P-39s along the Alaska Highway, to life-saving medical missions. The RCAF's "Kings of the Norseman" are featured.

Early Postwar Times: These chapters study the transition from war to peace. Suddenly 100s of war surplus Norsemans are cheaply available. The Norseman goes back to its roots in the bush and Arctic. The Norseman V is introduced, then the Beaver appears, changing the market equation. Noorduyn sells to CanCar. Great flying adventures ensue, but there also are grim tragedies.

Aviation in Canada: The Noorduyn Norseman, Vol.1 is a book to please any reader who enjoys Canada's renowned aviation heritage. It's been created using the tried and true CANAV recipe – the research is solid, the story is well told. The airplane is front and centre, but the great people involved get full recognition. This book is "an original" from start to finish – you'll love it!