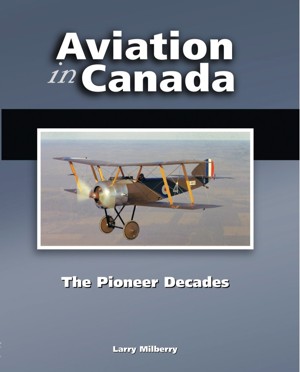 This product was added to our database on Friday 27 february 2009.

Aviation in Canada: The Pioneer Decades, Volume 1 of CANAV's 100th Anniversary tribute to Canadian aviation (1909-2009) will be off the press on October 31 and soon on its way to our subscribers and to booksellers in the know. This extra-special title will be a treasure for all with an interest in Canada's wonderful heritage in the air. This will be a book that you'll be spending a lot of time with and ... if you're in the aviation biz, a premier gift item when it comes to impressing the heck out of aviation-minded employees, customers, suppliers, retirees and other VIPs.

Aviation in Canada: The Pioneer Decades begins with ballooning in the 1840s, then proceeds to powered airplane flight culminating with the Silver Dart at Baddeck. All the efforts of Alexander Graham Bell and the Aerial Experiment Association are included, e.g. Baldwin's first powered flight at Hammondsport, NY in 1908, and McCurdy's historic flight at Baddeck in 1909. Then comes a flood of developments. Baldwin and McCurdy demonstrate their airplanes to the military at Camp Petawawa, other Canadians get "the flying bug", the first great aviation meets occur at Montreal and Toronto in 1910, then the airplane gradually makes its way to cities and towns all across Canada.

The wartime chapters (1914-18) deliver in-depth coverage of the rapid advances engendered by world conflict at the dawn of modern aviation. They also emphasize the carnage wrought in the air, and the raw heroism that became frighteningly "normal" (Canada's three iconic Victoria Cross airmen are testimony to this). Special emphases are given to the great Royal Flying Corps (Canada) air training plan of 1917-18, and to Canada's nascent aeronautical industry which, with exactly zero experience, would produce nearly 3000 airplanes for the war effort in less than 2 years.

The book features more than 100 WWI airmen, most of whom have remained in the shadows over the generations. Besides all the true heroics, the wartime chapters tell many a heartbreaking story -- this first great air war was not a pretty thing. Aspiring young pilots die while training at Camp Borden and Camp Mohawk, whole Zeppelin crews are sent plunging to certain doom by Canadians like Robert Leckie, bomber crews ditch hopelessly at night, and airmen leap without parachutes from flaming planes so they can have "clean" deaths.

Volume 1 ends with the return of peace. Squadrons disband, factories close and airmen go home to resume normal lives, at least as far as that is possible. The last few pages lay the groundwork for Volume 2 – the interwar years 1919-1939. Altogether, Volume 1 will knock you out with its written coverage (100,000+ words), then with its treasury of 300+ beautifully reproduced photos, many never before seen in any Canadian book.

This is a book for any aviation connoisseur or Canadiana buff. Who knows -- it may even influence one or two among "our dumbest generation" to take a moment away from their flight simulator games and chat lines.