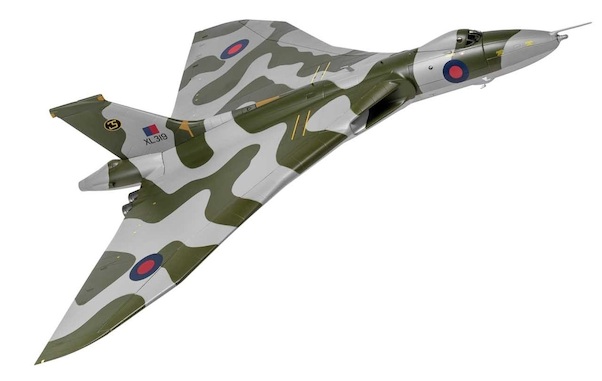 Avro Vulcan B.2 XL319, RAF No.35 Squadron, Scrampton, Early 1980s For an aircraft which was conceived as a high altitude nuclear strike bomber, the Avro Vulcan would prove itself to be extremely adaptable when Soviet missile technology advanced to such a point where high altitude sorties were no longer viable and proved just as capable when flying closer to the ground. This change in mission profile would also see Vulcans finished in very different scheme presentations, with the initial all white anti-flash protective finish replaced with a grey and green camouflage for lower altitude operations. At first, the Vulcans retained their glossy white undersurfaces, highlighting the fact that the aircraft could still be required to deliver a nuclear payload, but by the mid 1970s, these white under-surfaces had been replace by a matt light aircraft grey low visibility scheme. This particular Vulcan B.2 is wearing the standard scheme applied to these aircraft from the mid 1970s, a time when it once again became acceptable for squadrons to display their badge on the Vulcan's tail, in this case, the rather unusual stylised 'skyhook' of No.35 Squadron. During the Falklands War, this Vulcan was one of three aircraft sent to undertake a goodwill tour of the USA, where the mighty delta proved to be a real hit with the American public. She is now a much loved exhibit at the North East Land, Sea and Air Museum in Sunderland and historically, was the first RAF Vulcan to be released to an independent collection in the UK. It seems inconceivable that an aircraft which was intended to wreak devastation on an unimaginable scale
would actually turn out to be something of an Airshow phenomenon and a real favourite with the British public, but that is exactly what the Avro Vulcan did. During its service life, the Vulcan could always be relied upon to draw an Airshow crowd wherever it performed, but when the last RAF operated example embarked on its final display season, huge public support implored the Royal Air Force to rethink the decision and keep the aircraft flying in a similar way to the aircraft of the Battle of Britain Memorial Flight.

Unfortunately, the financial implications of such an undertaking proved prohibitive and as Avro Vulcan B.2 XH558 landed at her new Bruntingthorpe airfield home on 23rd March 1993,
Britain thought she had seen a Vulcan in the sky for the last time. Miraculously and in no small part down to continuing public support and generous donations, the aircraft did take to the sky once more, embarking on a whirlwind eight year period where she was the absolute darling of the Airshow scene and arguably the most popular single aircraft to be found anywhere in the world. Every single event where the Vulcan was scheduled to appear would not only benefit from thousands of people filling the venue itself, but would also see thousands more lining surrounding roads and fields, all desperate to catch a glimpse of this massive aviation icon. Although clearly a historic aircraft in its own right, the Vulcan definitely worked its way into the hearts of the British public in a way that no other aircraft appears to have managed to do and certainly must rival the Spitfire.