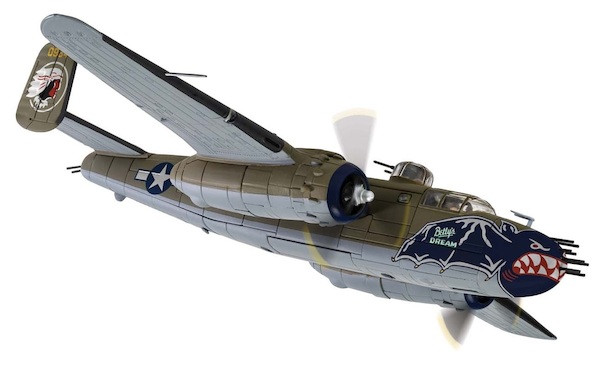 Constructed as a late model B-25J Mitchell, 44-30934 was assigned to the 499th Bombardment Squadron ('Bats Outta Hell') at Clark Field, Philippines, one of the squadrons which made up the 345th Bombardment Group, the famed 'Air Apaches'.

Flying dangerous, yet devastatingly effective low altitude bombing and strafing missions against Japanese targets across the Pacific, the unit earned a fearsome reputation for aggressively carrying out their missions, using heavily armed B-25 Mitchell gunships. Even though 'Betty's Dream' only saw action in the Pacific Theatre for a relatively short period, the aircraft was afforded a unique and historic honour at the end of the war, in recognition of the unit's significant contribution to eventual Allied victory.

She was one of two B-25 Mitchells sent to rendezvous with an official Japanese surrender delegation which was flying from a base in Japan and to escort the aircraft to the US airfield at Le Shima, on the island of Okinawa. The Japanese officials were flying in two G4M2 'Betty' bombers, which had been hastily overpainted in a distinctive white scheme, with their national insignia replaced by green crosses, intended to avoid being shot down by US forces.

Once the Japanese officials arrived at Le Shima, they were transferred to a USAF C-54 transport aircraft and flown to Manila, where representatives of the victorious Allied nations were waiting to formalise the terms of the Japanese Empire's surrender. Earning a reputation as one of the most effective medium bombers of the Second World War, the B-25 Mitchell would also be used as a hard-hitting, low altitude attack aircraft, fighting across the South West Pacific and helping to drive the Japanese back to their home islands.

Around 800 of the B-25J variant were produced specifically for this task, replacing the greenhouse nose of the bomber version with a solid nose housing eight .50 calibre machine guns and incorporating additional fuel tanks to allow long distance strike missions to be undertaken. Targeting airfields, shipping, supply dumps and troop concentrations, these extremely hazardous missions were usually flown from an inland direction, breaking away out over the sea, to give them the best chance of avoiding enemy defensive fire.

With groups of two or three aircraft attacking in waves at tree top height and from different directions, strafing with up to fourteen guns each and dropping parafrag bombs as they came, being on the receiving end of an 'Air Apache' attack must have been a terrifying experience.

Helping to establish the fearsome reputation of these attack Mitchells, many of the 345th BG aircraft were embellished with aggressive looking nose artwork, such as the 'Hell Bat' featured on 1st Lt. Charles 'Pop' Rice Junior's 'Betty's Dream', an aircraft which would have an important escort role to perform in the days after the end of the Second World War. It was charged with escorting the Mitsubishi 'Betty' bomber carrying the only official copy of Japan's surrender terms, as it headed for an airfield near Tokyo on 21st August 1945.