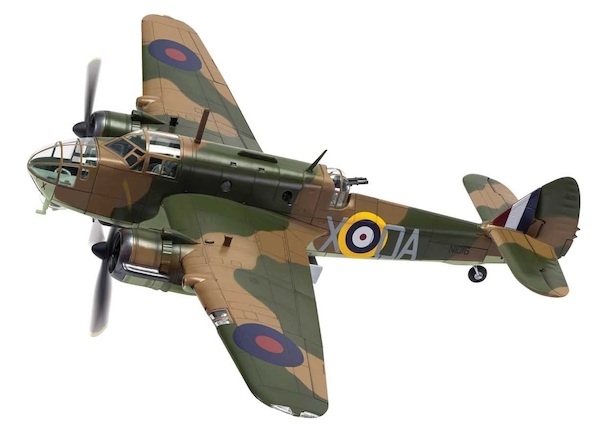 As an Island nation, the protection of Britain's sea lanes during the Second World War was a crucial battle which had to be won. Throughout the first few months of conflict, the German capital ship Gneisenau and her sister vessel Scharnhorst were posing a serious raiding threat and on receiving news that the ships had entered Brest harbour to undergo repairs in late March 1941, the RAF immediately planned raids intended to destroy, or at least damage the ships. On Sunday 6th April 1941, Bristol Beaufort Mk.I N1016 (OA-X) took off from RAF St. Eval in Cornwall and headed for a rallying point off the coast of France, close to the entrance to the harbour. Even though the weather was poor, they were surprised to find that they were the only aircraft to make it and with radio silence crucial to the success of the mission, the crew faced the decision whether to press on with their attack alone, or return to base. Although the odds were seriously stacked against them, they turned towards the heavily defended harbour and began their attack run, descending to almost wavetop height. Pilot Flying Officer Kenneth Campbell, expertly lined up his Beaufort for the optimum attack angle, passing so close to enemy shore batteries that they could hardly fail to hit their target, but only releasing the single torpedo when he was sure it would strike the warship.

Almost hitting the mast of the ship as the aircraft pulled away in a violent, banking turn, the Beaufort exposed its undersurfaces to the anti-aircraft gunners, who raked it with everything they had. Having sustained heavy damage during its attack run against Gneisenau, Bristol Beaufort N1016 crashed into the harbour almost immediately, tragically claiming the lives of all souls on board. Unbeknown to them, their attack had successful and the torpedo had blown a huge hole under the waterline of Gneisenau, causing it to return to the dry dock from where it had only just emerged, in need of further repairs. It would be out of commission for almost six months following the attack and it is impossible to gauge how many lives were saved and how much vital cargo reached its destination as a result of the heroic actions of this single Beaufort crew. Launching their attack alone, the selfless actions of Flying Officer Kenneth Campbell and his crew would have probably gone unheralded had it not been for the intervention of the French resistance. Sending a report on the condition of the German battleship back to British authorities, they also described the actions of this brave Beaufort crew and how they had paid the ultimate price whilst heroically performing their duty. For displaying valour in the face of extreme peril and without regard for his own safety, Flying Officer Kenneth Campbell was posthumously awarded the Victoria Cross, Britain's highest award for valour in the presence of the enemy, an honour he would surely have gladly shared with the rest of his crew.