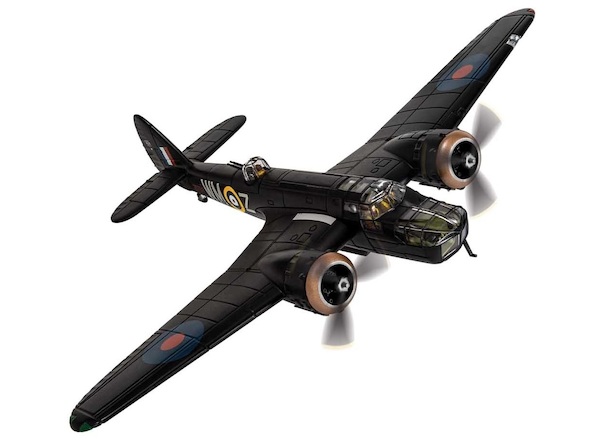 Bristol Blenheim Mk.IVF G-BPIV, Z5722 / WM-Z Spirit of 'Britain First', Duxford Airfield, 28th May 1993, restored as a Mk.IVF Nightfighter, the personal aircraft of the Commanding Officer, RAF No.68 Squadron, Wing Commander Max Aitken DSO, DFC, CZMC With the restoration team behind the world's only airworthy Bristol Blenheim having to suffer the devastation of seeing their magnificent aircraft crashing at an Airshow in June 1987, only four weeks after making its first flight, you might think they would have struggled to find the resolve to start all over again. Thankfully, they were in no mood to accept defeat and almost immediately started a campaign to fund a second restoration, whilst at the same time scouring the world for the parts they would need. Using the wealth of experience they had gained during the initial restoration, this second project would be completed in around half the time and see a beautiful new Blenheim ready to make its first post restoration flight at Duxford in May 1993.

Looking very different to the first aircraft, Blenheim G-BPIV was built as an all-black Mk.IVF nightfighter, with the serial Z5722 and wearing the codes WM-Z. This scheme was selected in honour of Wing Commander the Hon Max Aitken DSO, DFC, CZMC, as his personal aircraft during his time as the Commanding Officer of No.68 Squadron at RAF High Ercall during 1941. The aircraft also carried the name Spirit of 'Britain First' on its port side fuselage, in direct reference to the name carried by the first Blenheim ever to fly.