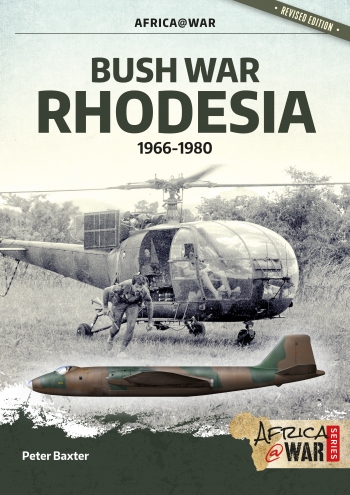 Share this product
Also in this series:
9781912866908Helion & CompanyBooks on aviation / War in Africa
Product description

It has been over four decades since the Union Jack was lowered on the colony of Rhodesia, but the bitter and divisive civil war that preceded it has continued to endure as a textbook counter-insurgency campaign fought between a mobile, motivated and highly trained Rhodesian security establishment and two constituted liberations movements motivated, resourced and inspired by the ideals of communist revolution in the third world. A complicated historical process of occupation and colonization set the tone as early as the late 1890s for what would at some point be an inevitable struggle for domination of this small, landlocked nation set in the southern tropics of Africa. The story of the Rhodesian War, or the Zimbabwean Liberation Struggle, is not only an epic of superb military achievement, and revolutionary zeal and fervour, but is the tale of the incompatibility of the races in southern Africa, a clash of politics and ideals and, perhaps more importantly, the ongoing ramifications of the past upon the present, and the social and political scars that a war of such emotional underpinnings as the Rhodesian conflict has had on the modern psyche of Zimbabwe. The Rhodesian War was fought with finely tuned intelligence-gathering and -analysis techniques combined with a fluid and mobile armed response. The practitioners of both have justifiably been celebrated in countless histories, memoirs and campaign analyses, but what has never been attempted has been a concise, balanced and explanatory overview of the war, the military mechanisms and the social and political foundations that defined the crisis. This book does all of that. The Rhodesian War is explained in digestible detail and in a manner that will allow enthusiasts of the elements of that struggle - the iconic exploits of the Rhodesian Light Infantry, the SAS, the Selous Scouts, the Rhodesian African Rifles, the Rhodesia Regiment, among other well-known fighting units - to embrace the wider picture in order to place the various episodes in context.