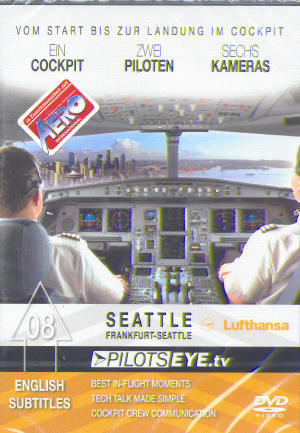 This product was added to our database on Friday 10 july 2009.

A trip with PilotsEYE.tv to Seattle and the Boeing factory The flight leaves from Frankfort over the North Sea. The plane continues across Greenland over the most northern alternate airport Thule. The route travels over the fascinating ice landscapes of the Canadian Archipelago, and on to Cambridge Bay, south of Victoria Island. The weather allows for an extensive view of the Canadian North-West territories, as well as its capital Yellowknife. Sunlight glances off the snow and glacier of Mount Robson, the highest mountain of the Canadian Rocky Mountains. After passing by Whistler Mountain, the former volcano Mount Garibaldi Vancouver appears. Passion for flying The captain on this PilotsEYE flight is Frank Lunemann, second-in-command captain of Lufthansa. For Lunemann, who continues his pilot family tradition in the third generation, it was a reunion after more than 30 years away. His father took him as a small boy to the Boeing plant, where, back then, even submarines were built. Now, once again at the plant, Lunemann meets Mark Feuerstein, the leading test pilot at Boeing, who will be flying the Superjumbo first. Today, he will disclose already which features the pilots and passengers will experience. Feuerstein is leading test pilot at Boeing. After his conclusion and guidelines e.g. the pilot manuals for specific types of aircrafts are drafted. The viewers watch how a new wing is assembled; it is weighted down with a two-ton concrete block to simulate the realistic load situation in the air. The Museum of Flight - Present meets past Time-travel to the future ends with an excursion to the past, into the world-famous "Museum of Flight", located right next to runway 31L of the Boeing airport in King County. Here, the crew meets another Boeing expert: Patrick De Roberts, who has worked for Boeing for 40 years as executive test pilot and pilot instructor. Today, DeRoberts lectures in one of the most famous aviation museums, and brings the Lufthansa pilots back to the history of commercial aviation. Experience the fascination of flying with PilotsEYE.tv In each episode of PilotsEYE.tv, the viewer has his/her own personal seat in the cockpit. Six high-definition cameras are installed in the cockpit and allow the witness experience all the exciting moments of flying, with detailed and mould-breaking quality. Relevant commands and radio messages in the course of takeoff and landing, as well as incomparable views from the front windows, and detailed information about the flight, can be experienced - German and English subtitles are provided. "PilotsEYE.tv addresses aviation enthusiasts," says Thomas Aigner, Managing Director of AignerMEDIA. "We let the viewer experience for the first time the world in and from the cockpit. You get the feeling of being live in the cockpit."