Destruction of a dream, the tragedy of Avro Canada and the CF-105 Arrow (IMAVIATION AVRO ARROW) 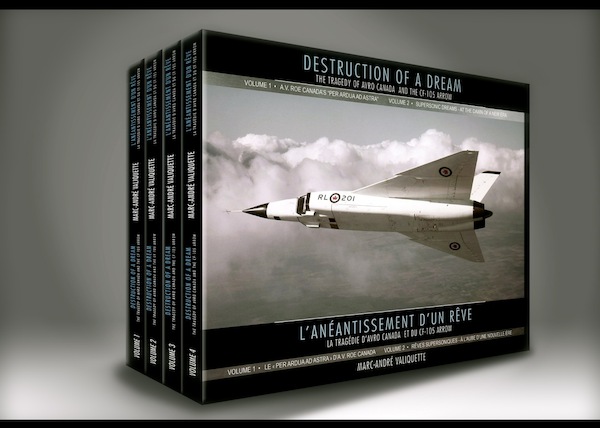 Destruction of a dream, the tragedy of Avro Canada and the CF-105 Arrow (IMAVIATION AVRO ARROW)
€ 110.05
NL incl. VAT € 119.95
Oversize shipping surcharge is applicable depending on country of destination. Will be shown before checkout.

This product was added to our database on Friday 2 May 2014.

More than 55 years after its demise, the CF-105 Arrow still evokes mixed emotions.
Not only the Arrow, but all of Avro Canada's postwar projects were significant undertakings for this country's aircraft industry. Avro Canada and Orenda Engines were really "the" places to work for during the period of 1945 to 1959.
Unfortunately, a few of these projects would never be fulfilled.

For the first time a bilingual volume series tells the story of the Malton plant, from its birth in 1938 until its demolition in 2003. Although there have been a few books recounting the stories of the C-102 Jetliner, CF-100, CF-105 Arrow and the Avrocar new information is disclosed that will surely fascinate readers.

The series consists of four volumes:
- The first volume, A. V. Roe Canada's 'Per Ardua Ad Astra', recounts the rise of the company, from its birth as National Steel Car up to the manufacturing of the CF-105 Arrow. The subjects covered include Second World War achievements, postwar adaptation, the C-102 Jetliner, the CF-100 Canuck, the CF-103 and the start of the CF-105 project (96 pages).
- The second volume, Supersonic Dreams - At the dawn of a new era, is dedicated to the Arrow, from its rollout to the RCAF's acquisition of the Bomarc missile (96 pages).
- The third volume, Seeds of Suspicion, deals with the last weeks of the Arrow project until 'Black Friday' (104 pages).
- The fourth and final volume, Master in our own house?, discusses the project cancellation, the destruction of aircraft, engines and materials, post-Arrow projects, 'Avroites' reunions and work at the Malton plant, including Orenda, until its demolition in 2003 (152 pages).