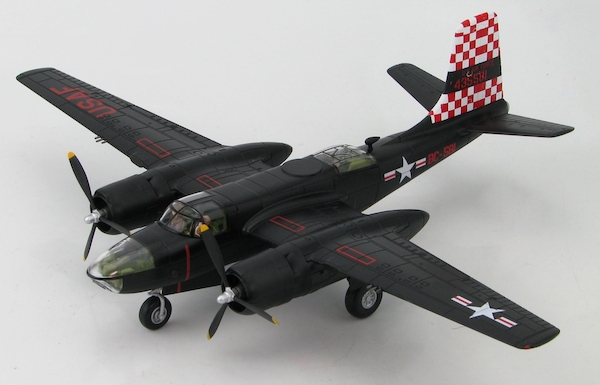 This product was added to our database on Monday 6 july 2015.

True 1/72 scale.
Professionally painted.
Great attention to detail.
All markings are Tampoed (pad applied).
Option to display the model on a stand that is provided.
Model can be shown with the landing gear in the down or up positions.
Loads of optional armament provided.
Canopy can be removed to place figures inside.
3 figures included.
Turrets can turn.
Bomb bay can be opened with 6 bombs included.
Extremely heavy metal with a minimum of plastic.
Highly collectable.

In 1941 Douglas Aircraft Company began work on their twin-engine medium-bomber A-26
Invader. By the end of production there were 2,452 aircraft produced for all variants. The A-
26/B-26 was the only U.S. bomber to take part in three wars, WWII, Korea and Vietnam. The
confusion with the use of the designation B-26 began when the Martin B-26 Marauder was
retired and in 1948 the USAF dropped the “A” (Attack) designator so the Douglas A-26
Invader became the B-26 Invader. The A-26 made its first European appearance in late 1944.