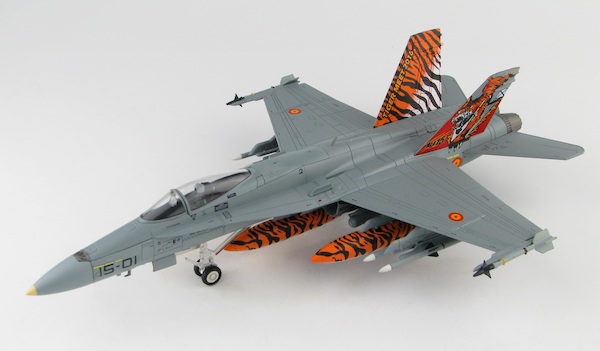 This product was added to our database on Thursday 17 October 2019.

The McDonnell Douglas (now Boeing) F/A-18 Hornet is a supersonic twin engine all-weather
night fighter and attack aircraft. The F/A-18s first flew in November 1978 and the first production
flight on April 12, 1980. The first 380 aircraft were F/A-18As and in September 1987 production
switched to the F/A-18C. Variants A and C are single-seat aircraft while B and D are tandem-
seats. The Hornet can operate from either aircraft carriers or land bases with the capability of in
flight refueling. A total of 1,480 A-D variants were built.


Between May 16 and 27th, 2016 the Spanish Air Force ALA 15 located at Zaragoza Air Base
hosted the NATO Tiger Meet for that year. There were 97 aircraft taking part in the exercise over
the 2 week event making it the largest NTM in the event history. In honor of the NATO Tiger Meet
most aircraft are given some form of a paint scheme featuring the markings of a tiger. Spain's
EF-18A 15-01/C15-14 from ALA 15 received a very elaborate scheme on its tail and tanks.

Specifications for the McDonnell Douglas F/A-18A/B