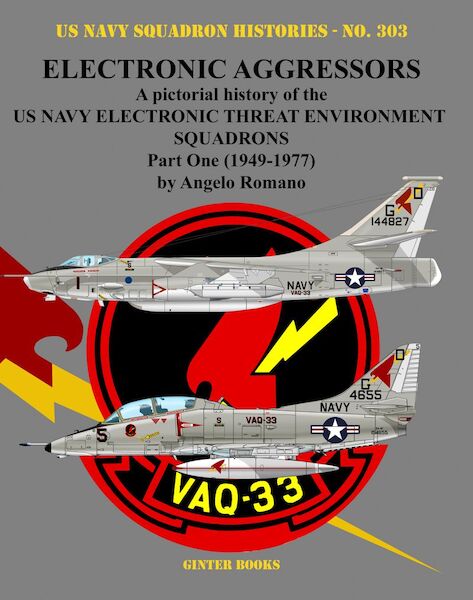 This product was added to our database on Wednesday 18 December 2019.

The first in a two-book series, this volume covers Fleet Electronic Warfare Support Group's (FEWSG's) activities, vital to fleet training, but still unknown to many. Angelo Romano has done a superb job of writing the complete history of FEWSG, its units and their histories. In particular, Part One covers the history of VAQ-33 through its previous designations, VC-33, VA(AW)-33 and VAW-33, from 1949 to 1969, when the squadron mission ranged from Day & Night Attack with conventional weapons, Anti-Submarine Warfare (ASW), Electronic (or Electro-magnetic) Counter Measures (ECM), Target Towing, All-Weather Fighter and, when assigned to CVBs, Nuclear Weapons Delivery. With the establishment of FEWSG in 1969, VAQ-33 changed its mission to Electronic Warfare (EW) training.  218 pages, 544 photos (mostly color), 48 color profiles, 22 patches, 34 tables and graphs.< Plenty of historical photos illustrate in detail the Squadron activities both at sea and ashore. These two books are dedicated to the women and men of the Electronic Aggressors.