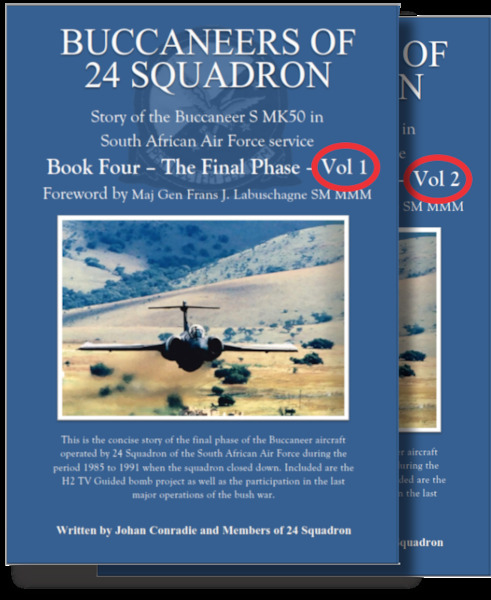 Buccaneers of 24 Sqn, Story of the Buccaneer S50 in SAAF service, Book Four, Part 1 and 2

This product was added to our database on Friday 26 August 2022.

This is the concise (738 pages split into two volumes) story of the final phase of the Buccaneer aircraft operated by 24 Squadron of the South African Air Force during the period 1985 to 1991 when the squadron closed down. Included are the H2 TV Guided bomb project as well as the participation in the last major operations of the bush war.

This is the story of the SAAF Buccaneers S Mk50 and their service in 24 Squadron.

We had flown successfully in an air defence environment that until then, had been met by no other Air Force in the World; and in so doing, we were blessed with no further losses of aircrew or an aircraft in operations. This would not have been possible without the utmost of dedication on the part of all the aircrews dispatched on Buccaneer sorties; and for that of ground crews that went to great lengths, often under trying circumstances, to ensure mission-readiness of the aircraft.

Please note, these are two big and hefty books and transport costs are very high hence the high price.

747-B Den Story Vikingen: Huge Viking: The Story of the 747 in Scandinavian Service

Eyes of the Fleet, Seaplanes in Argentine Navy Service

Scheduled Helicopter Services – Then and Now