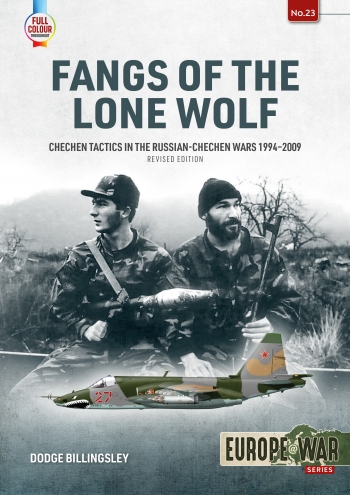 Fangs of the Lone Wolf

This product was added to our database on Friday 9 December 2022.

Books on guerrilla war are seldom written from the tactical perspective and even more seldom from the guerrilla's perspective. Fangs of the Lone Wolf: Chechen Tactics in the Russian-Chechen Wars 1994–2009 is an exception. These are the stories of low-level guerrilla combat as told by the survivors. They cover fighting from the cities of Grozny and Argun to the villages of Bamut and Serzhen-yurt, and finally the hills, river valleys and mountains that make up so much of Chechnya. The author embedded with Chechen guerrilla forces and knows the conflict, country and culture. Yet, as a Western outsider, he is able to maintain perspective and objectivity. He traveled extensively to interview Chechen former combatants now displaced, some now in hiding or on the run from Russian retribution and justice.

The military professional will appreciate the book's crisp narration, organization by type of combat, accurate color maps and insightful analysis and commentary. The civilian reader will discover the complexity of "simple guerrilla tactics" and the demands on individual perseverance and endurance that guerrilla warfare exacts.

The book is organized into vignettes that provide insight on the nature of both Chechen and Russian tactics utilized during the two wars. They show the chronic problem of guerrilla logistics, the necessity of digging in fighting positions, the value of the correct use of terrain and the price paid in individual discipline and unit cohesion when guerrillas are not bound by a military code and law.

Guerrilla warfare is probably as old as man, but has been overshadowed by maneuver war by modern armies and recent developments in the technology of war. As Iraq, Afghanistan, the Philippines and

Chechnya demonstrate, guerrilla war is not only still viable, but is increasingly common. Fangs of the Lone Wolf provides a unique insight into what is becoming modern and future war.

This revised edition reproduces Fangs of the Lone Wolf in Helion's @War format, with added colour photographs of the conflict, along with specially commissioned colour artworks.

Hawker Hurricane MKIIb (BACK IN STOCK)

Sikorsky H-34 (Around the World)