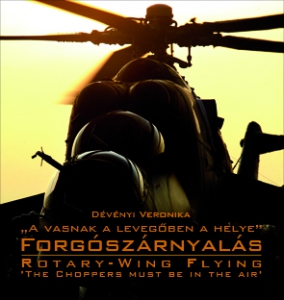 ForgůszŠrnyalŠs - Rotary Wing Flying , The Choppers must be in the Air

This product was added to our database on Saturday 25 April 2015.

Bilangual book about the Mil8, Mi17 and Mi24 of the Hungarian Air force. Many spectacular, previous unpublished pictures including the Hungarian Helicopters operating in Afghanistan

In 1783, man successfully took to the air for the first time by hot-air-balloon. After the eras of ballooning and gliding, the age of powered flight started in 1903. The advent of helicopters opened up new vistas. Thanks to their vertical take-off and landing (VTOL) capability, they can fly liaison and casualty evacuation missions to sites where there are no aerodromes. The first two Mi-4 helicopters arrived in Hungary in 1955. The Mi-24 helicopters entered service with the armed forces in April 1985, and the Mi-17s, the upgraded version of the Mi-8s, in February 1988. The rotary-wing aircraft have become indispensable elements of modern warfare, as they have great maneuverability and can be used to insert and extract airborne/air assault forces and assets.

With the help of a Hungarian-developed reconnaissance container, the Mi-24 is capable of detecting discrete radiation sources and reconnoitering contaminated areas. In many cases, these military helicopters are the last chance in rescue operations during disaster situations, floods, firefighting, industrial, traffic and natural disasters. One of their main tasks is to recover aircraft in distress and to rescue the survivors.
Hungarian troops on international peace support operations can also count on their rotary-wing aircraft, which supported the bridge reconstruction work of the Hungarian Engineer Contingent during the IFOR/SFOR operations in Bosnia-Herzegovina. Hungarian rotary-wing airmen, the members of the Air Mentor Team and the Air Advisory Team deployed with ISAF are active participants in generating the capabilities of the Afghan Air Force during the NATO-led operations in Afghanistan.