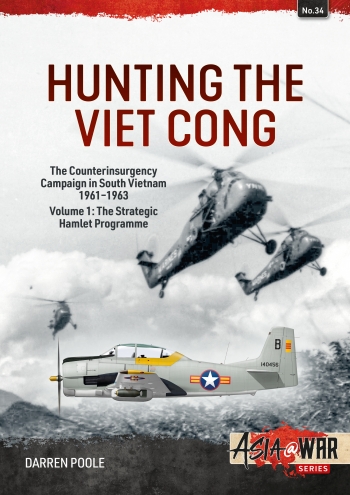 This product was added to our database on Friday 30 September 2022.

The early 1960s are considered to be a period of failure in the fight against the Viet Cong. However, new research reveals that the VC came very close to being defeated. They were – in their own words – being 'cut up'.

Hunting the Viet Cong: Counterinsurgency in South Vietnam 1961–1963 presents a new perspective on the early stages of the Vietnam War. It shows how the counterinsurgency policy of the American-backed Diem government was effective in separating the Viet Cong from many of their supporters, forced many VC into hiding and created a platform for further government success.

This first volume, The Strategic Hamlet Programme, examines both the Counterinsurgency Plan and the Strategic Hamlet Programme (based upon British success in the Malayan Emergency) and explains how these began to strangle insurgent activity. In many parts of South Vietnam, the VC were reduced to scavenging and intimidating the local people in order to survive. Tragically, this was a period when victory against the VC was possible but political ineptness, arrogance and military delusion threw this chance away.

Using documents captured from the Viet Cong, VC prisoner interviews and American military reports the book reveals just how close the insurgents came to being beaten. It contradicts and challenges many of the assumed notions of this time period; it reveals just how much American planners knew about Viet Cong methods, shows how they developed an excellent counterinsurgency strategy to combat insurgent violence and illustrates how – in contrast to the established wisdom – large parts of South Vietnam were under government control before the Diem coup in 1963.

Hunting the Viet Cong – The Counterinsurgency Campaign in South Vietnam 1961–1963 Volume 1: The Strategic Hamlet Programme includes 180 photographs of the conflict prior to major direct US intervention and a range of specially commissioned colour artworks of aircraft, vehicles and troops.

The Iran-Iraq War: The Greatest Land War of the Late Twentieth Century