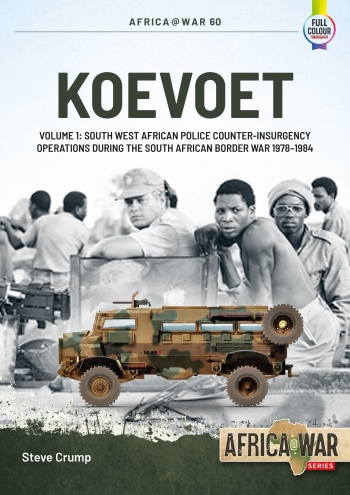 Koevoet (Afrikaans for 'Crowbar') tells of the origination and deployment of the South West African Police's elite counter-insurgency capability during the South African Border War of 1978–1989. Drawing upon previously unpublished sources and from interviews with a number of key personalities, including former members of Koevoet, this volume, the first of two, documents the formation of Koevoet and its early operations up to 1984.

Koeveot describes the recruitment of trackers from the local population; the integration of black and white Koevoet operators into a single entity; their training, organisation and deployment across the 'Operational Area'. The author examines Koevoet tactics in the field – including all arms co-operation with the South African Defence Force and the South African Air Force –  and the practice of 'turning' captured SWAPO/PLAN fighters and their employment across the Zulu teams. The design and evolution of the iconic Casspir and Wolf Mine-Protected Vehicles (MPVs) is covered as is their practical use on operations, alongside the development of other specialised weapons and equipment utilised by Koevoet.

In documenting Koevoet operations in Kavnago, Kaokoland and Owamboland, Volume 1 of Koevoet seeks to examine SWAPOL-COIN's effectiveness and to assess how the lessons learned between 1979–1984, shaped future Koevoet doctrine and thinking, to afford the reader a truly inclusive perspective on counter-insurgency today as police and armed forces globally move to a greater reliance on cutting-edge digital technology, including artificial intelligence.

Colour profiles detail a range Mine-Protected Vehicles (MPVs) used by Koevoet, including the iconic Casspir and Wolf, along with SADF and SAAF helicopters used to support these operations. Uniforms and insignia of Koevoet are presented in specially commissioned full colour artworks.