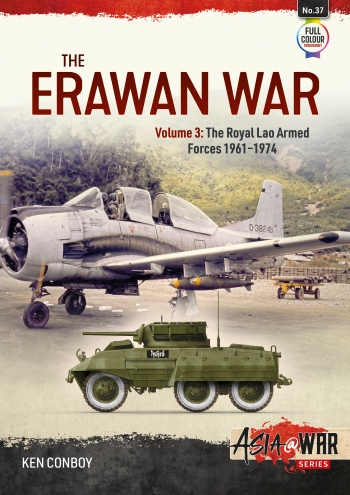 Best known by their French acronym for Forces Armées du Royaume – FAR – the Royal Lao Armed Forces were the official defence force of the Kingdom of Laos – what is now the Lao People's Democratic Republic – from 1949 until 1975. Founded in 1947, when King Sisavang Vong declared Laos an independent nation (and a Kingdom from 1949), the FAR originally included a collection of pre-existing Lao police and militarised constabulary units, regular indigenous colonial troops and locally raised irregular auxiliaries. While the latter two were described in the first two volumes of this mini-series, the emphasis in The Erawan War, Volume 3 is on the FAR, the build-up of which was constantly hampered by the developments in the First Indochina War in neighbouring Vietnam. Unsurprisingly, it was only in 1952 that the National Laotian Army – the predecessor of the Royal Lao Army – began to take shape, and only in 1961 that the Laotian Armed Forces were officially renamed the Royal Lao Armed Forces.

Plagued by an ineffective leadership at senior levels, and often suffering from chain-of-command problems, the FAR exerted little control over the regional commands and local military commanders for much of the 1960s. A country with a long-standing tradition of warlords – or local power-brokers – and the strong influence of an urban elite aristocracy, Laos took time to build-up effective armed forces, which reached their high tide in the second half of the 1960s, thanks to growing amounts of military aid from the USA. Eventually, the Royal Lao Armed Forces included not only a number of training centres, and several elite units, but the Royal Lao Army, the Royal Lao Air Force and the Royal Lao Navy, all of which fought a bitter war against the North Vietnamese and their local allies until the downfall of the Laotian Kingdom in 1975.

Richly illustrated with authentic original photographs and custom-drawn colour artworks, The Erawan War, Volume 3 is a highly authoritative single-point source of reference on the build-up and operational history of the FAR.