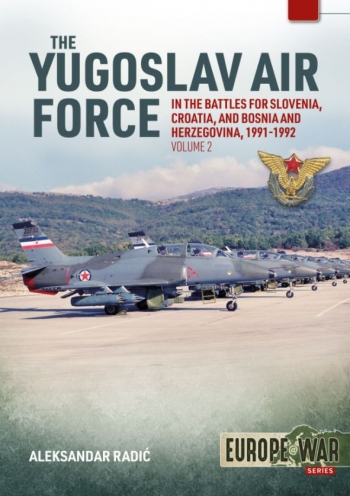 The Yugoslav Air Force in the Battles for Slovenia, Croatia And Bosnia and Herzegovina Volume 2: JRViPVO in Yugoslav War, 1991-1992

Following a brief war in Slovenia, and months of skirmishes and minor fighting in Croatia, during the autumn of 1991 the crisis in Yugoslavia culminated in an all-out war. The task of the Yugoslav Air Force and Air Defence (JRV i PVO) was to support friendly forces, foremost in regards of unblocking dozens of garrisons of the Yugoslav National Army (JNA), which the Croats were besieging.

Decades of ideological pressure during the Communist era and the ideology of brotherhood and unity of the ethnic- and religious communities in the multinational Yugoslavia created an independent political factor within the federal armed forces. However, in the fall of 1991, the top brass of the armed forces lacked a clear- and realisable plan. Following several bitter battles, and extensive negotiations, the Croatian authorities have left many of the besieged JNA units to go. However, the Serbs in Croatia, supported by the federal armed forces, then continued to fight for the control over the areas under their control, until the war culminated in major showdowns for Dubrovnik and Vukovar.

The official truce between Croatia and what was left of Yugoslavia by the time was set for 3 January 1992. However, it was followed by a series of incidents, causing deaths on both sides. Moreover, while the JNA peacefully withdrew from Macedonia, in February of the same year, new tensions erupted between the three dominant ethnic- and religious groups of Bosnia and Herzegovina. Indeed, a war erupted in that former republic of Yugoslavia only a month laterk with the forces loyal to the official government in Sarajevo, dominated by Muslims, and those of the Bosnian Croats, fought not only the JNA, but also the local Serbs. On 4 May 1992, the presidency in Beograd decided to withdraw the JNA from Bosnia and Herzegovina within 15 days, and to reform what was left of Yugoslavia as a new state. For the JRV i PVO, this was a particularly traumatic experience: out of a force including 860 fixed- and rotor-wing aircraft before the war, it was meanwhile down to about 770, but had to cram these into air bases of what was only 40% of the former state. Moreover, and before soon, writing was on the wall for the entire service, which was to be reformed as the air force of the Former Yugoslavia.

Based on author's unique approach to local archives and first-hand sources, and illustrated by over 120 photographs and colour profiles, the Yugoslav Air Force in Battles for Slovenia, Croatia, and Bosnia and Herzegovina is the first ever authoritative account on combat operations of the former Yugoslav Air Force in the conflict that shaped the modern-day southern Europe, and an indispensable source of reference on contemporary military history of this part of the World.