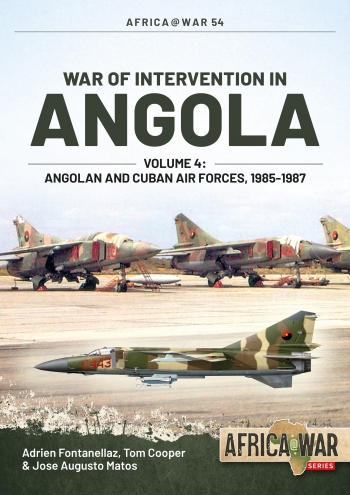 War of Intervention in Angola, Volume 4, continues the coverage of the operational history of the Angolan Air Force and Air Defence Force (FAPA/DAA) as told by Angolan and Cuban sources, in the period 1985-1987.

Many accounts of this conflict – better known in the West as the 'Border War' or the 'Bush War', as named by its South African participants – consider the operations of the FAPA/DAA barely worth commentary. At most, they mention a few air combats involving Mirage F.1 interceptors of the South African Air Force (SAAF) in 1987 and 1988, and perhaps a little about the activity of the FAPA/DAA's MiG-23s. However, a closer study of Angolan and Cuban sources reveals an entirely different image of the air war over Angola in the 1980s: indeed, it reveals the extent to which the flow of the entire war was dictated by the availability – or the lack – of air power. These issues strongly influenced the planning and conduct of operations by the commanders of the Angolan and Cuban forces.

Based on extensive research with the help of Angolan and Cuban sources, War of Intervention in Angola, Volume 4, traces the Angolan and Cuban application of air power between 1985-1987 – during which it came of age – and the capabilities, intentions, and the combat operations of the air forces in support of the major ground operations Second Congress and Salute to October.

The volume is illustrated with over 80 rarely seen photographs, 5 original maps and 21 colour profiles, and provides a unique source of reference on this subject.