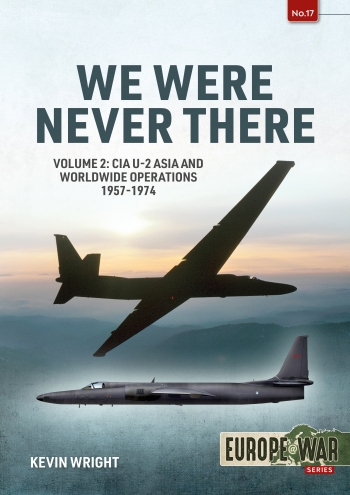 Devised by Kelly Johnson and operated by the CIA from 1956-74, the U-2 is the world's most famous 'spyplane.' It flew at unprecedented altitudes and carried the most sophisticated sensors available, all in the greatest secrecy.

The second volume of We Were Never There concentrates on the period of operational missions mainly across Asia from 1957-74. The book utilises a large number of declassified documents to explore some of the remaining secrets of these missions.

The book starts by looking at some of the missions conducted by the CIA's Detachment 'C' U-2s against key targets in the Soviet Far East up to Mayday 1960. It moves on to explore in detail the overflights of the Peoples Republic of China by Nationalist Chinese pilots in conjunction with the CIA. In particular, the study of Project TACKLE looks at efforts to gain intelligence on the PRC's expansive nuclear programme from the early 1960s. This is supplemented with details of Taiwanese/CIA operations against North Korea and its Yongbon nuclear reactor. It presents target images and reveals detailed routes for many of these overflights that have not been publicly seen before.

Whilst the USAF took the lead in operations against Cuba, the book explores the earlier CIA missions against Cuba during the Bay of Pigs landings and the missile crisis. Another chapter explores the efforts to equip the U-2 for operations from US Navy aircraft carriers. Detachment G, based at Edwards AFB, had a worldwide contingency role, able to quickly deploy anywhere in the world. It undertook missions targets in Tibet, the PRC, Vietnam, Cambodia, Laos, British Guiana, Venezuela and elsewhere.

A section of the book examines the development of the U-2R, a major update of the original aircraft, making it larger and much more capable. Its handling characteristics and comparisons with the U-2C are explored with the help of interviews with two former USAF U-2 pilots who flew both models of the aircraft.

The final chapter looks at the return of the U-2 to Europe, in particular the UK, for training missions from the late 1960s. It covers details on operations over the middle east monitoring ceasefire arrangements between Israel and its neighbours in 1970 and 1973. It ends with the phasing out of Agency U-2 operations, the closure of projects TACKLE and JACKSON and an evaluation of the U-2's contribution to aerial intelligence collection.

Sea Harriers of the Falklands War