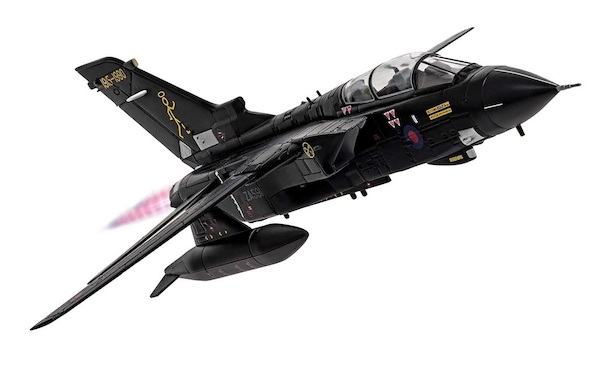 With many RAF squadrons able to trace their establishment back to the early air operations of the Great War, the 1990s saw quite a number of them commemorating their 75th anniversaries. As was customary on these occasions, several squadrons would send one of their aircraft into the paint shop to be adorned with special anniversary artwork, much to the delight of aviation enthusiasts across Europe.

These aircraft would spend the next few months attending official RAF events, open days and Airshows, where they would become some of the most popular and most photographed aircraft in the world. Without doubt, one of the most spectacular of the RAF squadron 75th anniversary schemes was the smart all-over black paint finish applied to Panavia Tornado GR.1 ZA591, an aircraft which would represent No.16 Squadron throughout their 75th anniversary year, and in some style.

The aircraft itself went on to attract a couple of unofficial titles following its repaint, both of which where christened by RAF personnel. To most, she was simply referred to as 'The Black Pig', but following the participation of RAF Tornados in the Gulf War, where the black painted American F-117 Stealth Fighter played such a prominent role, she was also colloquially referred to as the 'Stealth GR.1'. However you referred to her, No.16 Squadron's ZA591 was certainly one of the best looking Tornados to ever to see Royal Air Force service.

Even though the strike/attack variant of the Tornado would go on to post an impressive Royal Air Force service record which spanned almost forty years, No.16 Squadron would only spend a relatively short period operating this magnificent aircraft.

Exchanging their Blackburn Buccaneers for the Tornado in 1984, the squadron would only use the aircraft for seven years, but not before they had seen combat operations during the Gulf War and turned out one of the best looking squadron anniversary aircraft. On 11th September 1991, the squadron disbanded, but their number was applied in 'reserve status' to No.226 SEPECAT Jaguar Operational Conversion Unit, an aircraft it operated until this was withdrawn from service in March 2005.

The squadron originally formed at Saint-Omer, in the Pas-de-Calais region of France in 1915, where they were engaged in flying photographic, reconnaissance and artillery spotting sorties during the earliest days of military flying.

Always referred to as 'The Saints' in RAF parlance due to their original formation location, the distinctive stick man with halo logo applied to many of the squadron's post war jets is actually linked to the popular TV spy character of the same name, played by the suave future 'James Bond', actor Roger Moore.

Usually represented in gold on a black disc background, the 'gold Saint' surely never looked better than when he was applied to the large black fin of the squadron's 75th anniversary Tornado GR.1 jet during 1990.