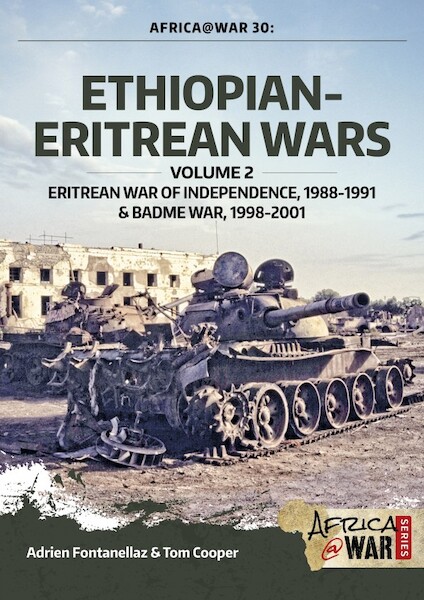 This product was added to our database on Friday 29 June 2018.

Share this product
Also in this series:
9781912390304Helion & CompanyBooks on aviation / War in Africa
Product description

Ethiopia, a country of ancient origins in eastern Africa, remains a military powerhouse of that continent until our days. Nowadays involved in the war in neighbouring Somalia, Ethiopia was also involved in half a dozen of other armed conflicts over the last 60 years. Crucial between these was the Eritrean War of Independence. Fought 1961-1991, this was one of biggest armed conflicts on the African continent, especially if measured by numbers of involved combatants. It included a wide spectrum of operations, from 'classic' counter-insurgency (COIN) to conventional warfare in mountains ? with the latter being one of the most complex and most demanding undertakings possible to conduct by a military force. Campaigns run during the Eritrean War of Independence often included large formations of relatively well-equipped forces, led by well-trained commanders, along well-thought-out plans, based on home-grown doctrine. The air power played a crucial ? although not necessarily decisive ? role in many of battles. Nevertheless, most of details about this conflict remain unknown in the wider public. Similarly, relatively few Western observers are aware of relations between the Eritrean liberation movements, and various dissident and insurgent movements inside Ethiopia ? although the synergy of these eventually led the downfall of the so-called Derg government, in 1991. While the first volume in this mini-series spanned the history of wars between Ethiopia and Eritrea between 1961 and 1988, the second covers the period since. Correspondingly, it is providing coverage of military operations that led to the fall of the Derg government in Ethiopia of 1991, the period of Eritrean military build-up and a complete re-organization of the Ethiopian military in the 1990s, and concludes with the first detailed account of the so-called Badme War, fought between Ethiopia and Eritrea in period 1998-2001. It is illustrated by many contemporary photographs, maps and colour profiles.