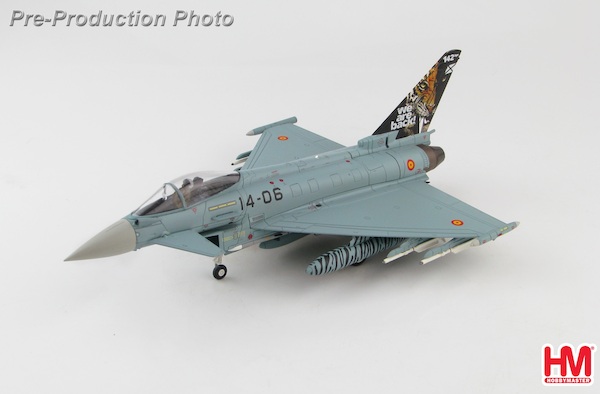 This product was added to our database on Wednesday 30 September 2020.

The Eurofighter Typhoon is a twin-engine multi-role fighter built by a European consortium made
up of the UK, Germany, Spain and Italy. With 4 countries involved it is necessary to have what
they call Tranches (similar to contracts) that are broken down into batches and blocks. The
development of the Eurofighter began in 1983 with the prototype maiden flight of the Eurofighter
taking place on March 27, 1994. The first fully equipped Tranche 2 Instrumented Production
Aircraft (IPA7) took to the skies on January 16, 2008.


The NATO Tiger Meet is an annual event for aviation teams from across Europe and a few other
countries to get together and test and/or improve their skills. The team members include
everyone from ground crew to aircrew. The 2016 NTM took place from May 16 to May 27 at
Zaragoza Spain hosted by ALA 15. Representing Spain's 142 Esc/Ala 14 from Albacete was
Eurofighter EF2000 MSN SS020 registration C16-39 code 14-06. The 142 Squadron had hosted
the 2006 NTM and were awarded full membership in 2008.