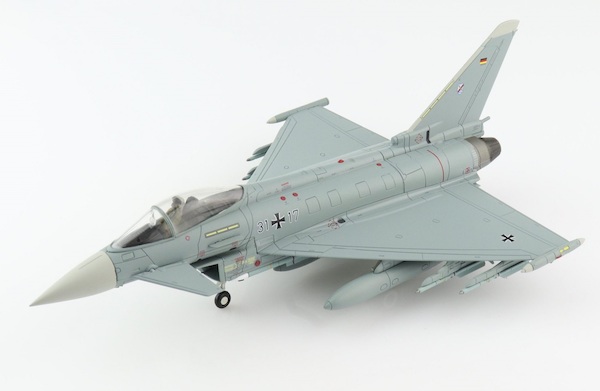 This product was added to our database on Thursday 28 October 2021.


The Eurofighter Typhoon is a twin-engine multi-role fighter built by a European consortium made
up of the UK, Germany, Spain and Italy. With 4 countries involved it is necessary to have what
they call Tranches (similar to contracts) that are broken down into batches and blocks. The
development of the Eurofighter began in 1983 with the prototype maiden flight of the Eurofighter
taking place on March 27, 1994. The first fully equipped Tranche 2 Instrumented Production
Aircraft (IPA7) took to the skies on January 16, 2008.


Eurofighter Typhoon QO-M registration ZJ-913 was delivered on March 30, 2005 as a Series
FGR.4 with a c/n BS004. Over the years this aircraft has spent time with the 2nd, 3rd, 6th and
IX (B) Squadrons. When stationed with 3 Squadron it was based at RAF Coningsby, Lincolnshire,
UK. In April 2019 IX (B) officially became operational and equipped with Eurofighter Typhoons ZJ-
913, ZJ921, ZJ924 and ZJ935. The IX (B) became part of the UK's Quick Reaction Alert (QRA)
Force, always on alert to scramble.

Large keyholder with 'Remove Before Flight' on both sides