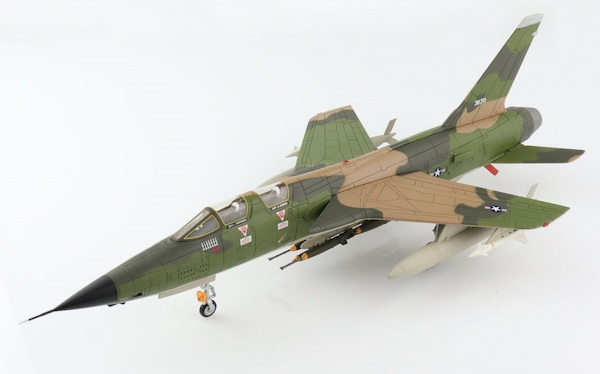 This product was added to our database on Thursday 22 july 2021.

Die-cast metal.
Superb detailing in 1/72 scale.
Pre-painted with pad applied markings.
Fully assembled.
Weapons that are not permanently attached.
Comes with crew figure.
Display stand included.
Option to display model with wheels up or down.
Minimum use of plastic.

Major Thorsness and Captain Johnson flew this Republic F-105F-1-RE Thunderchief, 63-8301, on 19 April 1967. It was one of 61 F-105Fs that were upgraded to the F-105G Wild Weasel III configuration beginning in late 1967. It survived the Vietnam War, but was destroyed 20 December 1974 when, assigned to the 35th TFW at George AFB, California, it crashed at the Cuddeback Lake Gunnery Range after an engine failure. (U.S. Air Force)

A description of the air battle follows:

The first MiG kill of the day was recorded by Maj. Leo K. Thorsness, pilot, and Capt. Harold E. Johnson, Electronic Warfare officer (EWO), flying an F-105F. Thorsness' flight consisted of four F-105F Wild Weasel aircraft, each plane being manned by a pilot and EWO and being specially equipped to locate and attack SAM sites. The flight was ahead of the main strike force and was committed to suppress SAM activity in the target area. About 8 to 10 MiG-17s attacked as the flight prepared to strike a SAM radar site with Shrike air-to-ground missiles. The Thorsness flight split up into three parts: the third and fourth aircraft entered into separate MiG engagements while Thorsness and his wingman continued the attack against the radar. The time was then about 4:55 p.m. Johnson provides an account of the encounter:

We found and delivered our ordnance on an occupied SAM site. As we pulled off the site heading west, Kingfish 02 ą called that he had an overheat light. He also headed west, and the crew, Majors Thomas M. Madison, pilot, and Thomas J. Sterling, EWO, had to eject from their aircraft. We headed toward them by following the UHF-DF steer we received from their electronic beepers and saw them in the chutes. . .

As we circled the descending crew, we were on a southerly heading when I spotted a MiG-17 heading east, low at out 9 o'clock position. I called him to the attention of Major Thorsness. . . .

The MiG was heading east and was approximately 2,500 feet mean sea level. We were heading southeast and at 8,000 feet MSL. I began "S" turning to get behind the MiG. After one and a half "S" turns the MiG had progressed from the foothills over the delta southwest of Hanoi. The MiG turned to a northerly heading, maintaining approximately the same altitude and airspeed. Captain Johnson continued to give me SAM bearings, SAM-PRF [pulse recurrence frequency] status and launch indications as I continued to maneuver to attain a 6 o'clock position on the MiG.

The first burst of approximately 300 rounds of 20 mm was fired from an estimated 2,000–1,500 feet in a right hand shallow pursuit curve, firing with a cased sight reticle. No impacts were observed on the MiG. Within a few seconds we were in the 6 o'clock position with approximately 75 to 100 knots overtake speed. I fired another burst of approximately 300 rounds of 20 mm. I pulled up to avoid both the debris and the MiG. While pulling up I rolled slightly to the right, then left. The MiG was approximately 100 feet low and to our left, rolling to the right. The two red stars were clearly discernible, one on top of each wing, and several rips were noted on the battered left wing. We continued to turn to the left and after turning approximately 130° again sighted the MiG, still in a right descending spiral. Just prior to the MiG's impacting the ground, Captain Johnson sighted a MiG-17 at our 6:30 position approximately 2,000 feet back. I pulled into a tighter left turn, selected afterburner, and lowered the nose. I again looked at the crippled MiG, saw it impact the ground in what appeared to be a rice field. After confirming the MiG had in fact impacted the ground I made a hard reversal and descended very near the ground, heading generally westerly into the foothills.

Thorsness then left the battle area, but returned after refueling to provide rescue combat air patrol during the search for his wingman's aircrew. Thorsness and Johnson attacked another MiG and scored some damaging hits before they were themselves attacked by other MiG-17s. Although it is highly probable that Thorsness and Johnson destroyed a second MiG, this kill was not confirmed.

Eleven days later, 30 April 1967, Major Thorsness and Captain Johnson were shot down by an AA-2A Atoll heat-seeking missile fired by a MiG-21 fighter piloted by V? Ng?c ??nh, 921st Fighter Regiment, Vietnam People's Air Force. They ejected but were captured. Both men were held as Prisoners of War until 4 March 1973.

The F-105D was first accepted on September 28 1960 and became the major variant
with 610 aircraft being built. Intended for a nuclear strike role but since the nuclear threat
became less likely the role became a high-speed bomber. The Pitot tube was moved to
the nose that had been extended approximately 15 inches more than the "B". The "D"
received strengthened landing gear and an arrestor hook in case it over shot the runway.
During 1966 and 1967 F-105Ds managed to down 25 MiGs using the 20-mm cannon and
2 other using Side-Winder missiles.


Specifications for the Republic F-105D Thunderchief

Fuel
Normal Internal Fuel Load - 1,160 US gallons
Internal Weapons Bay - 390 US gallon auxiliary tank
Optional 450 or 650 US gallon external tanks on the fuselage centerline
Plus a 450 US gallon tank on each of the inboard under-wing pylons