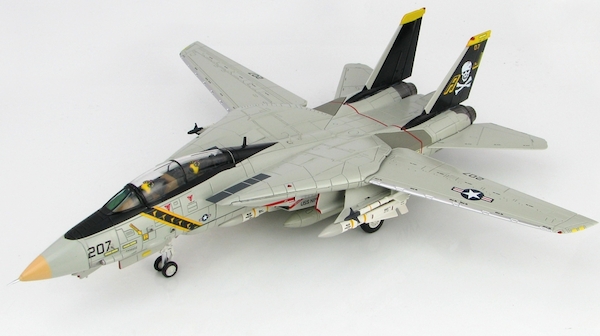 This product was added to our database on Friday 23 November 2018.

True 1/72 scale.
Professionally painted.
Great attention to detail.
All markings are Tampoed (pad applied).
Option to display the model on a stand that is provided.
Model can be shown with the landing gear in the down or up positions.
Optional armament provided.
Canopy can be displayed open or closed.
Pilot figure included.
Extremely heavy metal with a minimum of plastic.

The Grumman F-14 Tomcat is a twin-engine, variable sweep wings capable of supersonic flight.
The aircraft is crewed by a Pilot and a Radar Intercept Officer who share the tasks of navigation,
Navy and the Islamic Republic of Iran Air Force only. The name "Tomcat" is said to come from the
call-sign used by Vice Admiral Thomas Connolly which conformed to the USN tradition of giving
Grumman aircraft feline names.

In 2001 VF-41 "Black Aces" made their final F-14 carrier deployment in 2001 before transitioning
to the F/A-18E. To mark this occasion each aircraft aircraft had "Last Tomcat Cruise 1976-2001"
printed on the vertical stabilizers, "First to Strike" on the port side leading edge and "First to
Fight" on the starboard leading edge. A Maintenance Master Chief had named each aircraft after
eleven of his girlfriends so it was decided to paint a name on the starboard side of each aircraft's
radome. The CAG's aircraft BuNo 162608 received "Anna".
Hobby Master 1/72 Air Power Series
HA5217
Grumman F-14A Tomcat "Anna"
162608, VF-41, USS Enterprise, 2001

All markings are Tampoed (pad applied).

Option to display the model on a stand that is provided.

Model can be shown with the landing gear in the down or up positions.

Canopy can be displayed open or closed.

Extremely heavy metal with a minimum of plastic.

If you arrived at this page using a
search engine or a link from another
site please click on the home button
once during your visit so my visitor
counter will add your visit.
Thank you.
HOBBY MASTER COLLECTOR
аааааааааааSpecifications for the Grumman Aerospace F-14 Tomcat