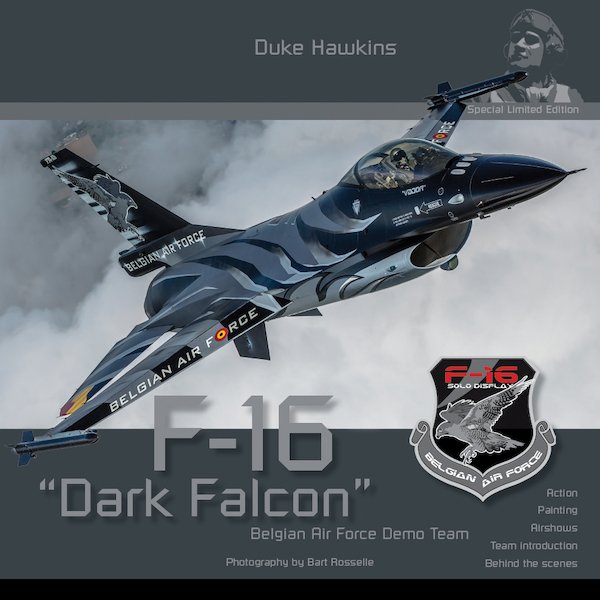 This product was added to our database on Tuesday 2 April 2019.

We managed to obtain a lest few copies from the publisher. When these are gone it is readly over, no more are left

Our third new book is a special Limited edition book, bringing a unique look behind the scenes of the Belgian Air Force's F-16 Demo Team. We offer you a look inside the paintshop, follow the ground crew team and show you a truly breathtaking look from inside the cockpit during the spectacular aerial display!
No reprints
This is a limited edition publication, available from the team during the 2019 airshow season. Only 500 copies of this 108-page book will be available through our resellers.
This book is a one-time publication, so there won't be a reprint. Be quick to order your copy !


This spectacular photo shows perfectly how impressvie the view is from inside the F-16 cockpit. Allround visibility couldn't be better and thanks to the well thought-out lay-out of the cockpit instruments and HOTAS - Hands on Throttle and Stick - the pilot can concentrate completely on the mission - or in the case of Vador, display. The photo gives an idea of the dynamics during the display. During the rehearsel of the airshow at Tanagra Air Base in Greece, Vador makes a sharp righthand turn towards the show center and prepares to make a high G turn to the left, making sure not to cross the runway

In each country where the F-16 Display Team performed, the Dark Falcon looked a little different. For the airshow in Tanagra, the aircraft sported a Greek flag on the left horizontal tail. During the first season, the Dark Falcon wore 10 different flags, underlining how much the Belgian Air Force appreciates the collaboration with the visited countries. On the right horizontal tail, the F-16 always sported the Belgian flag, except for one time, when no flag was placed on the stabilo at all - see page 19. This photo was taken by Dimitris Dimitrakopoulos during the airshow.
This book comprises 9 chapters, including information on the team, action during airshows, the international role of the Dark Falcon team, and a selection of photos taken by spectators during the 2018 airshow season. The book offers a unique perspective on the team and showcases air-to-air photos captured by some of the most talented aviation photographers in Europe.