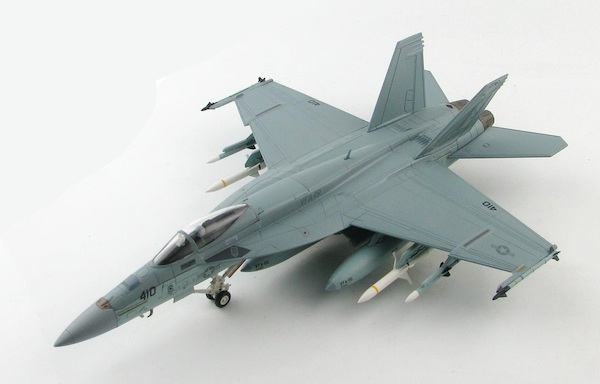 The McDonnell Douglas Boeing F/A-18E Super Hornet is a twin-engine multi-role carrier-based
aircraft. The "E" variant is single-seater while the "F" variant is a tandem-seat configuration. The
"E" is a much larger, more advanced and more capable variant of the F/A-18C. The Super variant
can carry a larger array of weapons as well as more of them and is capable of returning to the
carrier while still carrying unspent munitions, a big savings in dollars. The first F/A-18E flight was
in 1995 and began delivery to the USN in 1999.


In 1949 VFA-151 was originally nicknamed "Flashers" with a blue helmeted knight with a white
shield insignia. In 1955 the insignia was changed to the skull with a bloodied knife and in 1959
the nickname "Vigilantes" came into use to reflect their "around the clock" vigil of readiness. On
July 31, 2019 while flying F/A-18E 168471/400 Lt. Charles Z. Walker crashed in what is referred
to as Star Wars Canyon located in Death Valley National Park. To memorialize Lt. Walker
F/A-18E 410/168478 had several references to him applied to the fuselage and tail.