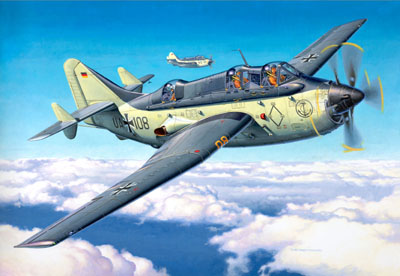 This product was added to our database on Tuesday 29 july 2008.

All new and highly accurate kit, not Trumpeter. This kit was prepared according to technical drawings provided by Karel Susa of 4+ Publications

The carrier-borne Fairey Gannet, designed for anti-submarine duty, made its first flight in 1949 and was the first aircraft in the world to fly with a coupled jet turbine power unit with counter-rotating propeller. It was also the first turbo-prop aircraft that could land on an aircraft carrier and the first aircraft of the British Fleet Air Arm capable of both combat and search operations. The Gannet AS went into service with the FAA in January 1955 and was stationed on aircraft carriers. In 1958 the newly formed Federal German Navy received 15 of the more powerful Gannet AS4s that were equipped with a 3,035 shp engine. In June 1966 the Gannet said goodbye to the Nordholz MFG3 station finally to be replaced by the Breguet Atlantique.