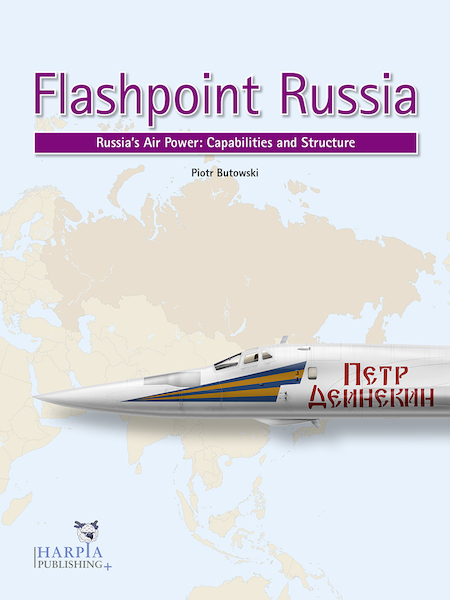 This product was added to our database on Tuesday 11 June 2019.

Russian military aviation has undergone several upheavals in the post-Soviet era. There have been two driving forces behind these changes. First, the Russian experience of air power in conflicts has led to an increasing integration of the various branches of the armed forces. Today's VKS was created as a result of the absorption of the Air Defence Troops (VPVO) by the Air Force (VVS) in 1998, and then a merger of the Air Force with the Aerospace Defence Troops (VVKO) in 2015.
Meanwhile, Russia has adapted to financial realities, with insignificant defence spending throughout the 1990s followed by rapid expansion as the global price of oil increased since the beginning of the 21st century. Mass purchases of aircraft and helicopters began in 2009, and the proportion of modern equipment in Russia's Aerospace Forces now exceeds 75%.
The fourth title in Harpia Publishing's series on Russian military aviation details all fixed-wing aircraft, helicopters and other aerial vehicles operated by Russia's military air arms.
Like the previous volumes, Flashpoint Russia is a comprehensive reference work, presenting organisational structure and the quantitative potential of Russian military aviation.
The centrepiece of the book describes the current order of battle of the Aerospace Forces (VKS) and other operators of military aircraft in Russia and includes all the country's aviation units.
Other chapters cover Russia's approach to purchases of arms and military equipment, and priority air programmes for the next decade.