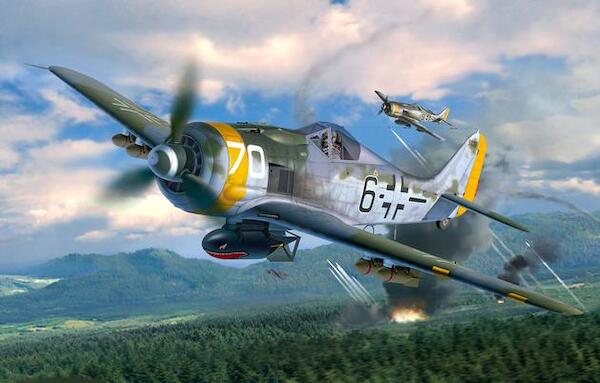 This product was added to our database on Wednesday 29 April 2015.

All New moulding
After the Bf 109 the Fw 190 was the second standard fighter in the German Luftwaffe. The aircraft proved to be both versatile and very robust. The Fw190 F-8 heavy fighter-bomber was produced in large numbers from the beginning of 1944 onwards. The F series was developed in 1943 specifically for the ground attack role. A 700 kg (1500 lb) bomb load could be carried on five external attachment points. The fuselage armour plating and the wing spars in the area of the main landing gear were strengthened, otherwise the F-8 corresponded to A-8 fighter version. After mass production had started a new wooden bladed propeller and a bubble-shaped canopy with reinforced head armour-protection were also installed on the F-8. From the beginning of 1944 until the end of the war more than 6,500 Fw190 A-8 and F-8 versions had been delivered.
- New mouldings
- Finely detailed surfaces with recessed panel joints
- A choice of open engine cowling, MG hatch or extended flaps
- Super detailed BMW 801 radial engine with exhaust manifold
- Moving rudder and ailerons
- Rotating propeller
- A choice of normal or curved cockpit canopy
- Detailed cockpit with side consoles and rudder pedals
- Detailed instrument panel
- Tail wheel can be mounted in either the retracted or extended position
- Detailed undercarriage
- A SC 500 or a SC250 bomb under the fuselage
- Four SC 50 bombs under the wings
- Two fully detailed MG 131 machine guns
- Large display stand with multiple flight positions