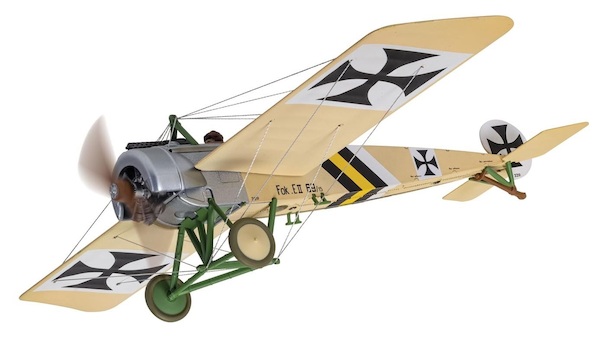 Few aeroplanes have had such a dramatic impact on the history of aerial warfare as the Fokker Eindecker series of monoplanes, aircraft which are regarded as the first true fighter aircraft in the history of aviation. It was not that these single-wing aircraft were such advanced aeronautical designs, as many of the world's successful early aircraft were monoplanes (such as the Bleriot XI which crossed the English Channel in 1909), however, they did make use of a particularly sinister innovation. The introduction of interrupter gear synchronised the aircraft's machine-gun to fire through the arc of the propeller, only allowing it to operate once the blade was clear and crucially, in the pilot's direct line of sight. For the first time, an aeroplane had been specifically introduced to hunt and destroy other aircraft – the day of the fighter aeroplane had arrived. Despite having a dramatic impact on the Western Front, the Eindecker was still a relatively primitive aircraft and required an immense amount of skill in order to be flown well. This was illustrated by eager young Luftstreitkräfte pilot Baron Kurt von Crailsheim, who on being posted to FFA 53 in the summer of 1915, had his and the unit's first aerial victory by 22nd September. Just a few days later, he crashed the twitchy Eindecker whilst attempting a landing at Monthois airfield, which resulted in his fighter being written off. He later received a new replacement aircraft, which he once again painted in his personal colours, but was to be the machine which claimed his life. Suffering a similar landing accident on 30th December 1915, his injuries would prove so severe that he died in hospital five days later.