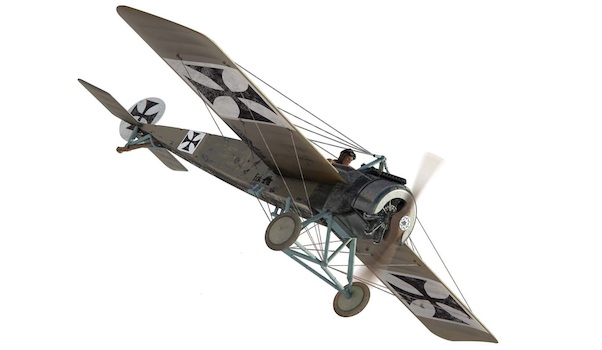 For a man who stands as arguably the most famous fighter ace of all time, Manfred von Richthofen would begin WW1 as a cavalry reconnaissance officer, however, the advent of trench warfare soon had him searching for a more appropriate challenge. Attracted by the thrill of flying, he applied to join the Imperial German Army Air Service, initially as an aerial observer, but only because the training was shorter than that of a pilot, so he could get into the action more quickly.

As an armed observer, von Richthofen shot down two Allied aircraft, but neither were credited as both came down behind enemy lines and could not be verified. A chance meeting with the influential airman Oswald Boelcke on a train journey across France inspired von Richthofen to apply for pilot training almost immediately and on passing his final examinations on Christmas Day 1915, he was assigned to Kasta 8 on the Eastern Front.

Honing his undoubted flying skills whilst conducting reconnaissance flights over the trenches, von Richthofen would meet Boelcke once more during the summer of 1916, where he was invited to become one of the first dedicated fighter pilots of the Luftstreitkräfte and a member of the specialist Jasta 2 hunting squadron.

With influential airmen such as Max Immelmann and Oswald Boelcke championing the use of the aeroplane as an offensive weapon during WW1, the arrival of the Fokker Eindecker at front line units would prove significant in the history of aviation.

The world's first true dedicated fighter aircraft, the Eindecker introduced an effective interrupter gear system, which allowed the pilot to fire through the arc of the propeller and in his line of sight, making targeting of an enemy aircraft much easier. Its introduction led to a devastating period of aerial supremacy for the Luftstreitkräfte which became known as the 'Fokker Scourge', however, despite the horrendous toll the Eindecker took of Allied aircraft, its destructive impact could have been so much worse.

Initially, the German High Command would not allow their new aircraft to be flown near Allied lines, for fear the secrets of their new fighter would be discovered and resulted in many simply being used to chaperone reconnaissance aircraft. Also, the handling characteristics of the Eindecker could prove extremely challenging for the pilot, with its flight control systems having changed little from those employed by the Wright Brothers during their famous first flight of 1903 – it required a pilot's undivided attention all the time.

A relatively fragile aeroplane, it would not be long before more robust and manoeuvrable aircraft ended the dominance of the Eindecker.