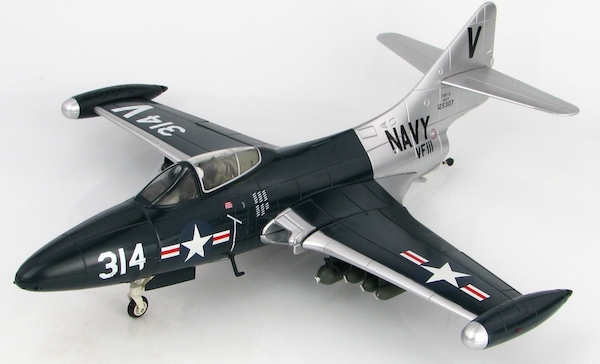 This product was added to our database on Thursday 12 September 2019.

Die-cast metal with a minimum of plastic.
All markings pad applied for superb results.
Cockpit slides open.
Pilot figure.
Comes with display stand.
Landing gear is fully retractable and can be displayed up or down.
Wings can fold and unfold.
Extremely sought after by collectors.

Powered by a Rolls-Royce engine the first F9F flew in 1947. These new engines were
fuel hungry and with no extra internal space permanent wing-tip tanks were added.
These tanks also had the unexpected benefit of increasing the aircraft roll rate. In the
Korean War the F9F was the primary USN aircraft for ground-attack and served with
distinction. However it was realized that the Panther was inferior to the MiG aircraft so a
swept-wing version was developed. The new aircraft retained the F9F designation and
was called the Cougar.


In late 1950 VF-111 "The Sundowners" took their F9F-2B Panthers to Korea aboard the
USS Philippine Sea (CV-47). On November 9, 1950 VF-111 Lt. CMDR William Amen
was the lead aircraft providing support to F4U Corsairs and AD-4 Skyraiders when five
MiG-15s were encountered. During that encounter Amen became the first person to ever
record a jet-to-jet victory. VF-111 was later upgraded to the F9F-5 Panther and
completed more cruises on the USS Valley Forge, USS Boxer and USS Lake Champlain.


Specifications for the Grumman F9F-5 Panther