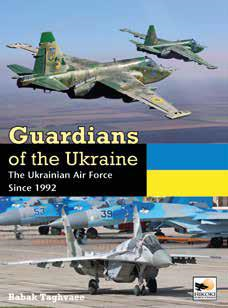 This product was added to our database on Tuesday 22 September 2020.

The independent Ukrainian Air Force was officially established on 17 March 1992. It inherited 944 former Soviet aircraft, making it the second largest air force in Europe. With a variety of exotic combat aircraft types, including the last operational Yak-28s and Su-15s in the world, the Ukrainian Air Force became of immediate interest to both aviation enthusiasts and air defence analysts.

In the mid-2000s the country's aircraft repair plants inaugurated upgrades to enhance the combat readiness of the aircraft and helicopters of the force, however, financial problems still led to a decline in combat strength. In 2014, when the territorial disputes on the Crimean peninsula became a full-scale war with pro-Russian separatists, the Ukrainian Air Force had a fleet of 66 operational-ready planes in service. These were used in interdiction and close air support missions and during the war approximately 14 aircraft were lost.

This book provides a detailed look on the organisation and combat strength of the air force's aircraft and helicopters. Drawing on a wide range of previously unseen photographs, supplemented by specially commissioned colour artworks, Guardians of the Ukraine presents all types of combat, transport and training aircraft, as well as helicopters previously or currently operated by the Ukrainian Air Force. The illustrations are supported by detailed captions many of which provide individual aircraft histories.